Indeed the view was nice across the valley when we woke. I lit the fire – a task allocated to me as the Malaysians recognise they are no good at this. 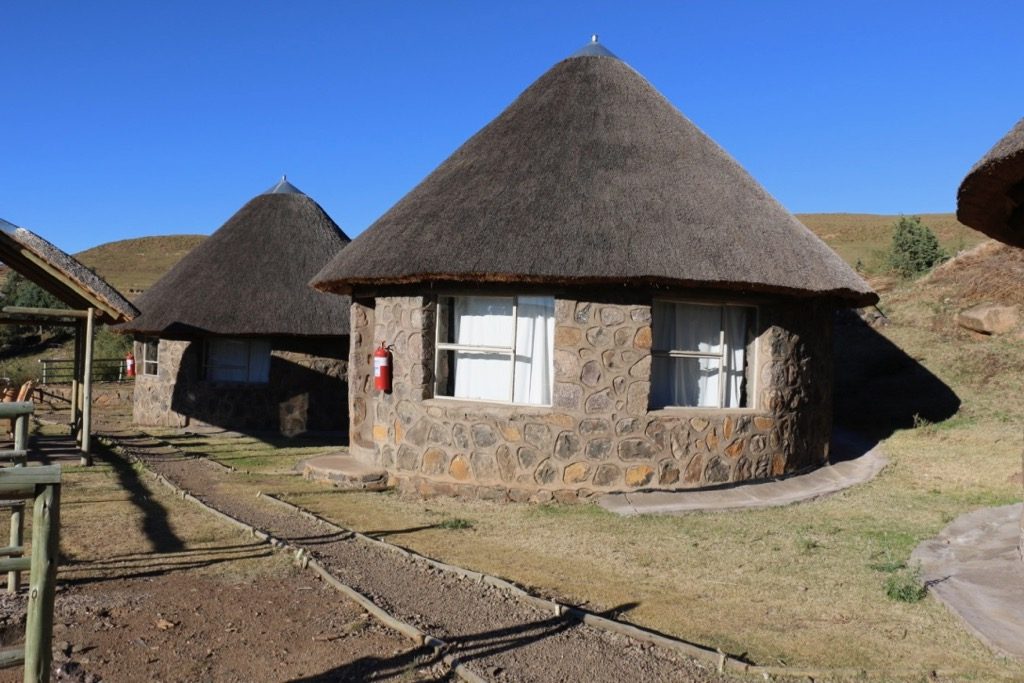 Hot water for coffee was brought to our hut at 7:30am and breakfast was a bit after 8. It was pleasant inside.

Full cooked breakfast was served in the restaurant – fruits, cereals yoghurt, then a woman asked me how I liked my eggs, and before long I had a plate of scrambled eggs, sausage, bacon, baked beans. I’m eating well.

After bouncing our way past the adjacent Semonkong village, with it’s rough stone/concrete block huts, dusty stony tracks, we found our way to the famous Maletsunyane Falls. It’s a 192m straight drop, and it’s famous because they do abseiling off the cliffs and hold the Guinness Book of Records record for a commercial abseil. For just over 1000 Rand – about A$100 you have a day of training then abseiling. We didn’t have time for this! 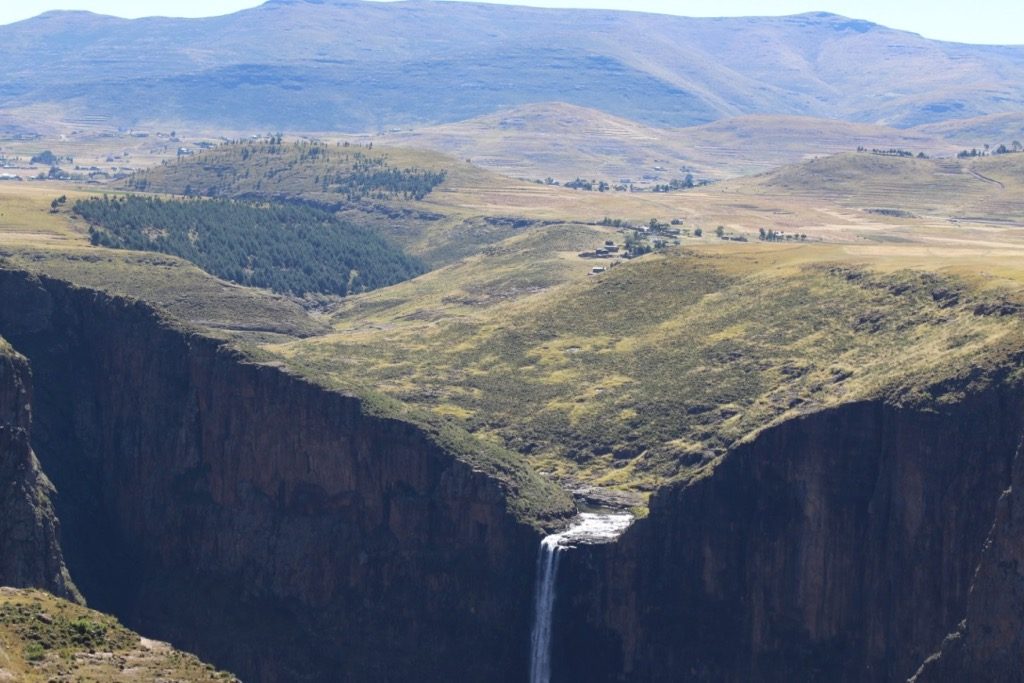 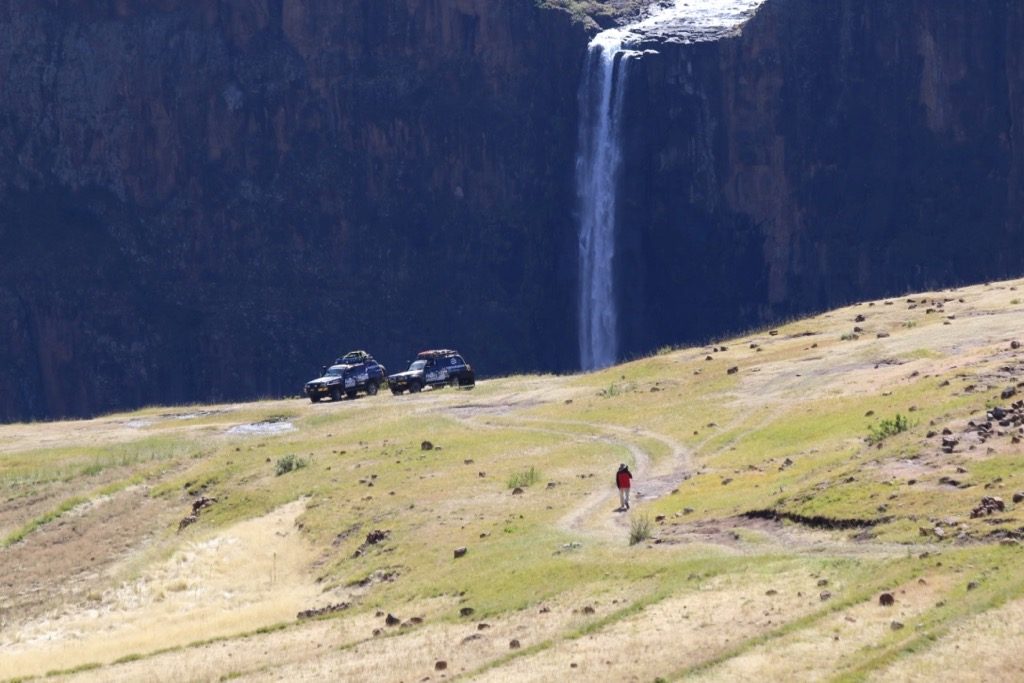 Swinging back to the south, the mountains remain completely huge and vast. Many passes means climbs in second and third gear, sometimes first if we encounter a speed bump on the highway next to a village. When these are on a hill, which they frequently are, first gear is needed which is then hard to get out of with a sick engine. We stop when the temp gauge shows signs of water loss, which equates to perhaps three or four times a day and is often timed with a pee stop or lunch break so we don’t hold people up too much. 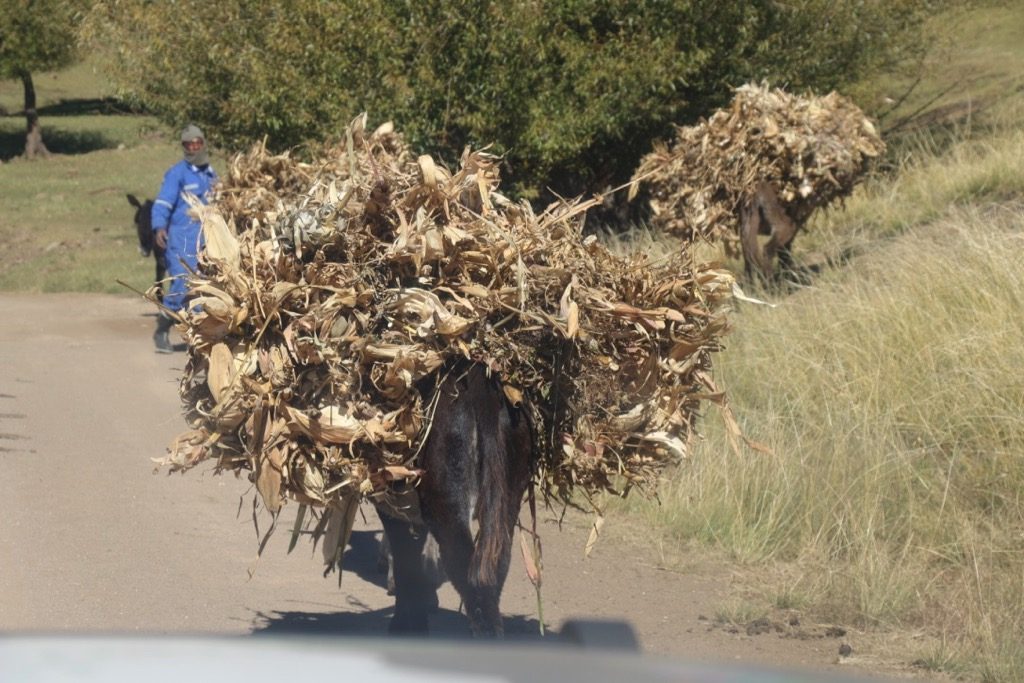 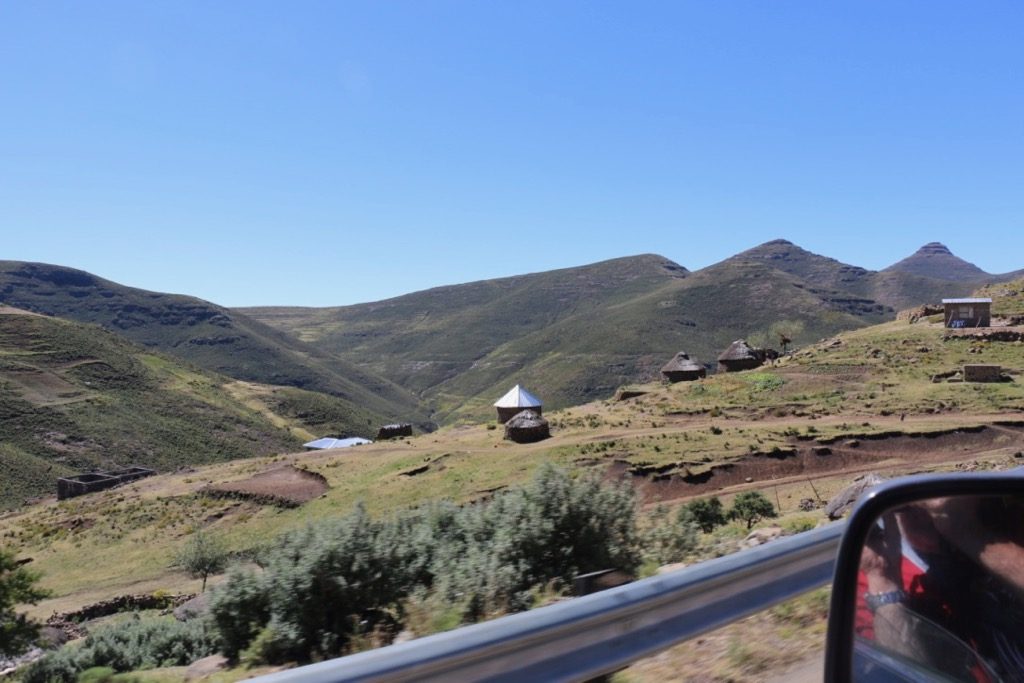 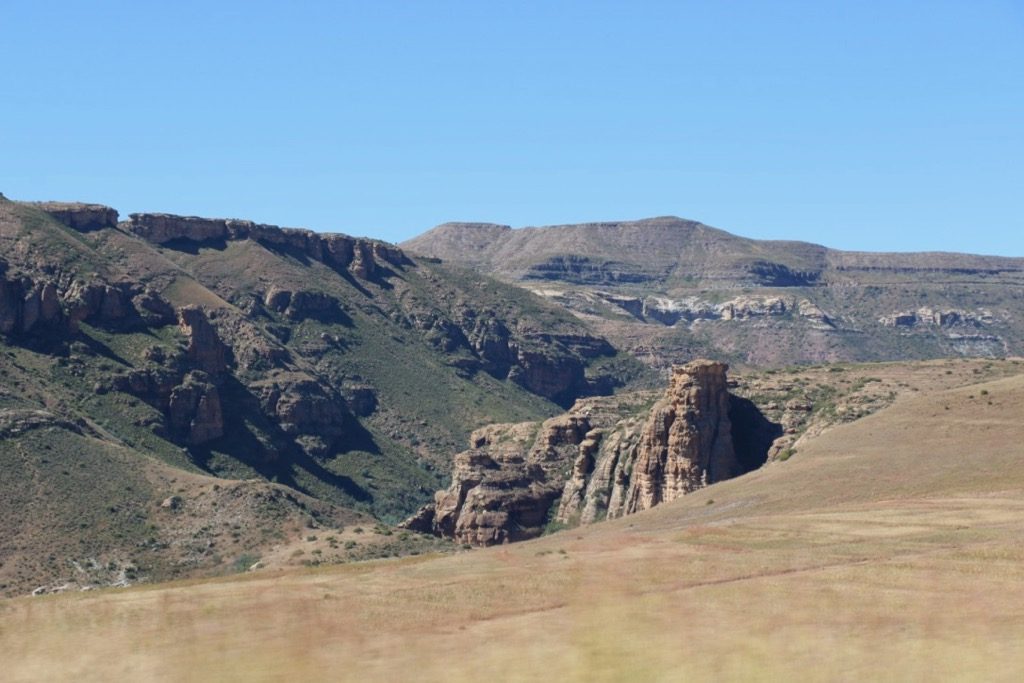 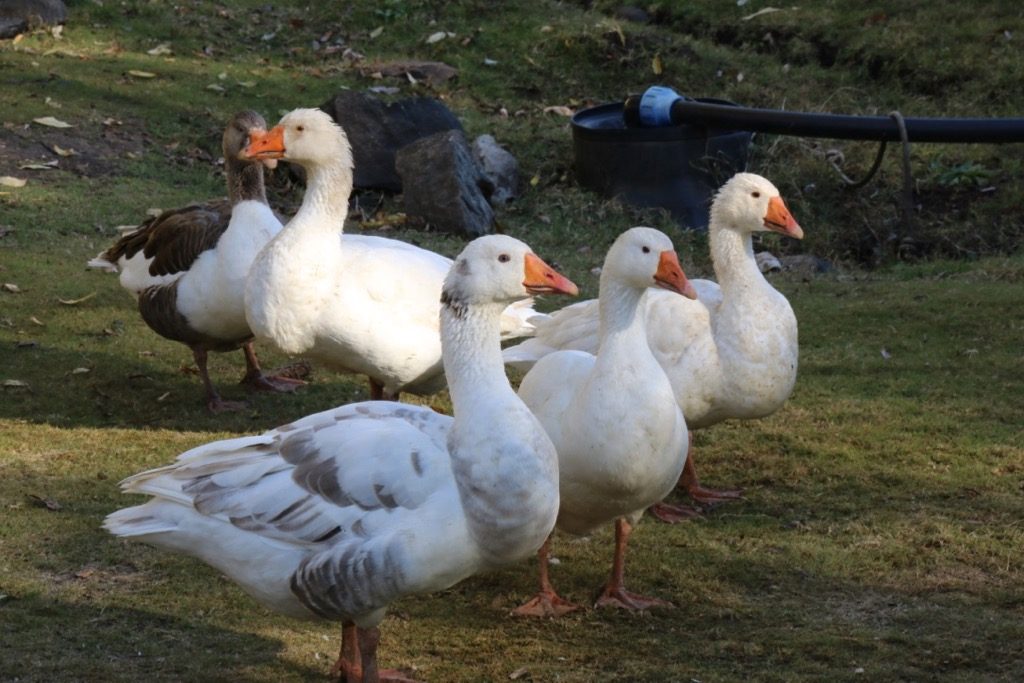 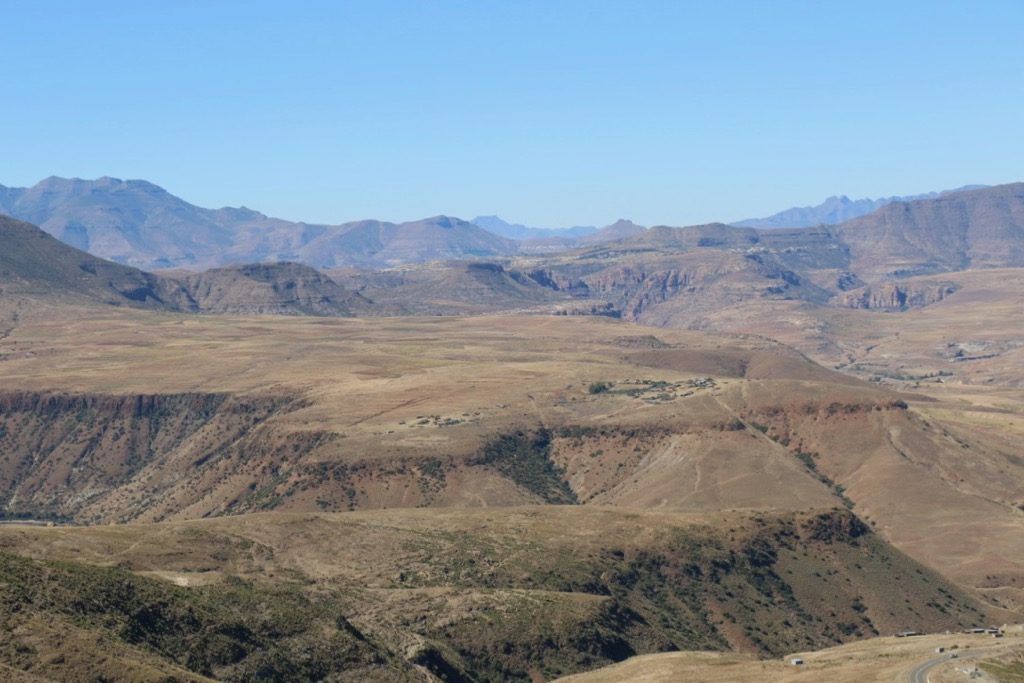 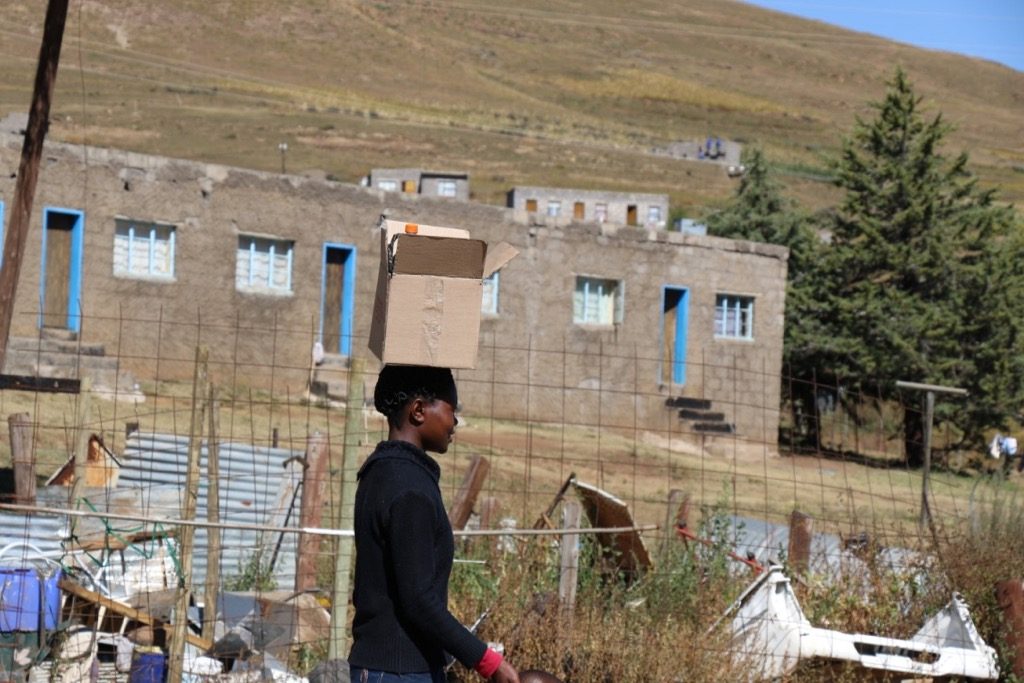 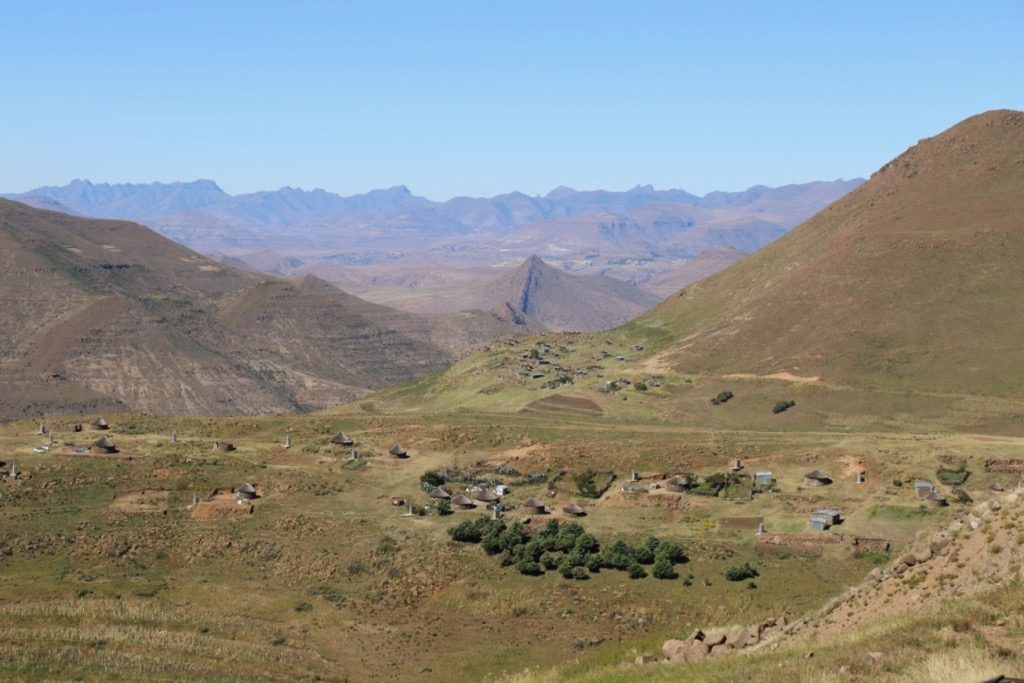 Once over the crest, then the windy steep descent also means third, and sometimes second gear to hold the bit heavy vehicle at a safe speed without overheating the brakes. I’m a bit over coaching our driver on how to do all this well. A friend of mine used to say – “the teacher will come when the student is ready”. This one is not ready!

The idea is not difficult to me. You have an old style turbo diesel engine with a blown head gasket. This means gently application of power – accelerator  – as this adds heat and pressure inside the already compromised combustion chamber and forces more gasses out the leaky head gasket. So, it is not sensible to push it much more than 2000rpm with gentle throttle, ie not foot to the floor. However, the engine has limited power below 1500rpm, just because it’s a diesel, so there is not much room to play with and frequent gear changing is required. It’s okay to have the engine run faster than 2000rpm especially on a long down hill descent, as there is no fuel going in and this normally helps cool the system down. It’s also okay to drive at less than 1500rpm, but only on very light throttle as your under no load and just puddling along not needing any power.

But when you see the road ahead is rising, the idea is to preselect a lower gear as soon as load comes onto the engine and the revs drop to 1700rpm, and in the lower gear the engine is happy at around 2000rpm and with a light throttle the turbo boost assists carry over the obstacle. If not, then a change back to second is needed and using the revs of the engine rather than just plonking the foot on the pedal is the way to go.

So I become disheartened when a driver doesn’t change gear until 1000 rpm, which if on a hill, means as soon as the clutch is disengaged, the vehicle essentially stops and you need to go down two or three gears to build the revs for the turbo to work and forward momentum to be rediscovered. I also become alarmed when the brakes are used on long downhills and no downshift is made to use the compression of the engine for braking. I don’t think this is a personal preference or style, I think it’s the right way to drive with the engine in the condition it is, in fact anytime really in a big vehicle. Awareness is coming, especially for the downhill. The teacher will come when the student is ready…..

A border crossing was processed. Easy exit of Lesotho. Stamp passport, carnet’s checked for the vehicles. Then a short drive to the South Africa border at Qacha’s Nek. Same process, but this took an hour. A cursory check inside the vehicle, much less than entering Russia three years ago.

More rough roads, very stony, and down onto the plain for refuelling at Matatiele. Dusk turned into night and we headed south on the R56 highway at a good speed until turning off at an ‘adventurous short cut’. This dusty road at night was no fun for me. It was slow going, and our driver took a lot of convincing to drop back several hundred metres from the car in front, instead of sitting 20m and collecting all the dust and being in a white out most of the time due to him using the high roof top lights. Eventually we got him to back off 500m or so. The track deteriorated, with low range used on my insistence at times. What I did notice was that on the highway, the radiator did not boil as easy, because we were at lower altitude. It was also cold outside, so the radiator carried away more heat – a good temporary fix.

High mountain passes, rocks and a track that was hardly discernible in the night. Fortunately we followed our leader, and I had accurate mapping too, so this gave confidence as the hours went by.

It was certainly an adventurous route that tested the vehicles and the drivers. One car, a stock standard  but completely overloaded nice Landcruiser Sahara – kept it’s city weight springs and every small undulation had the rear axle hitting the bump stops – an awful experience for the passengers. Yes, Landcruisers are strong but they don’t come from the factory to be ready for expeditions like this – soft springs, soft tyres…..  Just doesn’t cut it.

We arrived at 11:30pm with no dinner, and a closed reception. I eventually went to bed around 1:00am and there is a promise of a second nights stay here tomorrow.