Dropped Mum and Jacob at 4.15am at train station so they could go to Adelaide to catch their plane back to Perth.
Christopher and Cassidy and Dad packed up and headed back to Perth. We stopped in Whyalla and spent an hour touring the Navy ship ‘Whyalla’. It was built in Whyalla and is being restored. There was a different Navy number on either side and the lady told us one number was from when it was with the Royal Navy and the other number from the Australian Navy.
Went to Cowell and bought nice pies for lunch, then across the Eyre Peninsular via Cleve and arrived at Streaky Bay late in the day. Chistopher and Cassidy played with the pelicans and on the mud flats and playground as it was getting dark 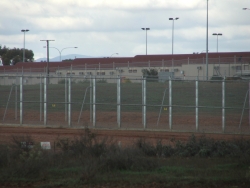 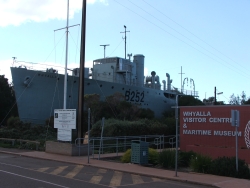 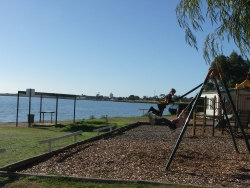