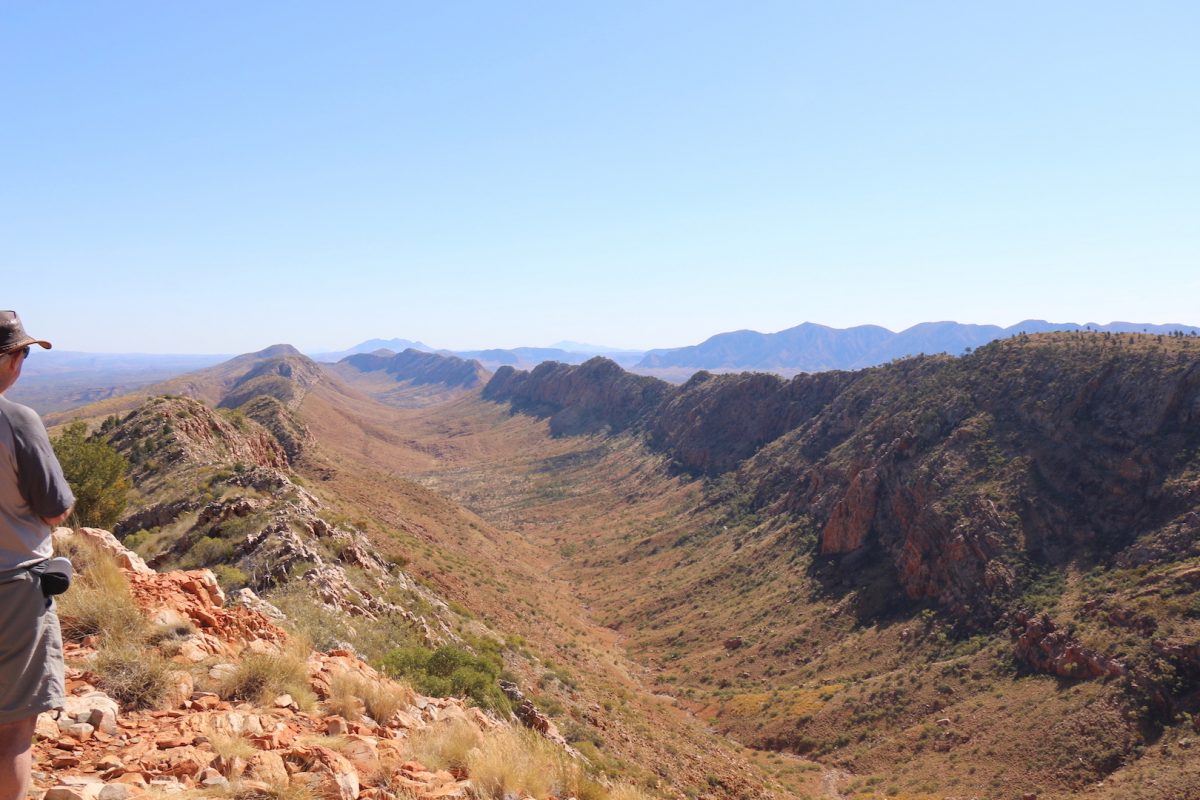 As always, holidays and mini breaks are always over much quicker than one hopes. The trick is to be able to switch into holiday mode as quickly as possible – stay ‘in the moment’ I believe is the phrase.

The Larapinta Trail follows the West McDonald Ranges from Alice Springs to Redbank Gorge, some 240km to the West. It’s a well marked track, but due to the arid conditions, rough terrain, and scarce water, it’s only for the intrepid – or those in a tour group.

We were the latter and joined Trek Larapinta for a supported 6 days hike. It was mostly fun, and any bits that were not fun were my own fault for not being fit enough. The guides, fellow trekkers, campsite, food and transport were all excellent. The bonus was that Kerry joined me, a first for an overnight hike.

This is a collection of photos from the next six days. We hiked for most of the days. Okay, we had two rest days out of six. Both of us enjoyed our rest time and don’t feel bad we missed on something. In reality, our fitness and desire to punish ourselves was lacking. The ground was rocky which means you take many short steps and somehow I became quite slow and not enjoying it one little bit. Once on the flat, I stretched out with long strides and regained some of my own perception of dignity.

We both enjoyed our week. I’m pleased to have done it. Pleased Kerry joined me. No regrets for not climbing Mt Sondor to see the sun rise. This involved getting up at 2am, hiking 800m vertical over 8kms, then waiting in the desert chill to watch the sun rise.

We stayed at Chifley in Alice, a decent hotel that served our needs.

I hope you’ve enjoyed the photos!!  Your enjoyment is why I take them.

Hiking along the Larapinta trail in the West McDonald ranges, Central Australia, has been something to do for a while.

The distance, lack of nice campsites, and water had put me off, as had the need for food drops. All too hard, like the harsh inland environment.

My lovely wife Kerry however has given me the impetus to get on an do this walk, but she had provisos. She would walk with me if we did a supported walk, one where we only carried a small Day pack during the day and our other needs were met by people we paid money to.

For a little moment I felt like I was moving to a next stage of life, from a tent to a caravan, from a house to ‘downsize’. I quickly stepped over that threshold when I heard the bit about her walking with me. This was going to be nice. And truthfully the idea of not carrying 20kg each was very appealing.

So after a bit of googling, we booked with Trek Larapinta. I’d also looked at Inspiration Outdoors who I came across when looking to become a tour guide a little while ago. But their tour was longer and included places we didn’t need to pay to be taken to again.

Today we fly to Alice Springs, and we’ll be home again in a week. Not sure how regularly the updates will come, it is the outback after all!!

Nice open boat to get all the views, just need to make sure you get sunscreened up before the hour long cruise.

The ticket place is many metres above the dry season river level, and the flood markings begger belief. Especially when the land appears flat all around, where does all that water go?

With a catchment over twice the size of the Ord River, the Fitzroy River is indeed a mighty river of Australia with a flow of several millions bottles of beer every second in flood.

Viewing the gorge on the water was nice and relaxing, the hum of the motor, the sun, it was easy to doze off.

The nests are from small fairy something birds. A few crocodiles were seen, this area is still yet to see the scourge of the dreadful cane toad. We have seen a few at each location, even Purnululu. They are likely to arrive in Fitzroy this wet season and will kill many creatures all the way up the food chain.

The artifacts on the photos are from the water marks left by that spitting fish at Chamberlain Gorge. The water dried out, but left a small few dust spots that will need a dismantle job to remove them.
After leaving Fitzroy we drove west towards Willare roadhouse and left around 10:15am.

We had heard the road had been closed the day before due to fire, so were pleased to be on the road and for it to be open. However the smoke appeared after not too long, appearing to the south of the road. A turn in the road had us heading straight into it. We passed a few fire vehicles along the way, and were waved on, no  one expressing much concern at our passing. The smoke got heavier, I turned on the lights and then over one particularly thick section I used the hazard lights too. Fire was fierce both sides of the road but the road verge was wide and well cleared back. A tree went up next to the road as we passed and all sorts of hot debris showered the bus and trailer; we felt the heat from the fire on both sides. It was only for 30 metres, and not really so dangerous given the width of the verge, but a different experience for our passengers indeed.
We made our way along the road and near the end of the highway, not far from the Willare Roadhouse, was a road block with about 10 cars and trucks waiting. The road from Fitzroy had been closed at 11am, 45 minutes after we left. Who knows how long we would have been stuck there. These fires are not fought, they are too vast and resources too few. It is a matter of keeping assets and travellers safe.
We arrived right on time at Broome and delivered our passengers to their respective accommodation. Matthew had a lot to do to prepare the bus for a trip to Cape Leveque tomorrow

what a start to the day, a helicopter ride over the bungles.

Took a few photos, spent the rest of the time hanging on.

Drive into Halls Creek for morning near the visitors centre and refueling. A nice tailwind really helped make for a pleasant drive, despite the high external temperature.
Drove out to a small but interesting local feature called the China Wall. A thin wall of Quartz amongst the other sandstone, formed by some strange geological action.

I drove through to the Yiyili chool and gallery where we had lunch and bought a nice piece of art. 75% of the sales go to the artist, the rest goes to the school who supplies materials and space for the artists.
As the wind dropped and we turned into the sun, driving became tiring, with plenty of heat coming off the the engine.

Our final night is at Fitzroy Crossing with another great meal of chicken and rice.