I woke at 2:30am to find the apartment flooded in light. Jenny told me later she thought at the time when she saw all the light –  “***** Tim, still on his computer”, which will be understood by many people who have had the pleasure of my company over a few days.

However it wasn’t be at all, it was the sun in they sky pushing through the layers of clouds and at around 15° above the horizon – what we might expect at 9:00am on a regular day. I still haven’t quite worked out how this is going to work, and if the sun will travel all around us to the east, south, then west as one expects, or if is will continue to cover the north sky as well. All will be revealed later I imagine, and you will be the first to find out,

Around 6:00am, Jean and I went for a walk around the harbour area of Longyearbyen and found our little boat the Kinfish parked, ummm, moored alongside the floating deck. This was reassuring and the excitement raised as all the planning of the previous months was coming together. Today was going to be our day to board.

Using my Groundwire app accessing my VOIP provider MyNetFone and a dedicated Perth number I bought from them, as long as I have 3G or WiFi access I can make a phone call with very clear sound.

We called our taxi driver from yesterday, Curri, and arranged a 10:30am pickup, then had a breakfast of toast and cereal before all of us going off for a walk. This time we walked onto the floating deck and met the crew from the Kinfish. They seemed like a happy and welcoming bunch.

Curri picked us up right on time and new we could leave our luggage at the Radisson, so took it there with us. This was a great relief as we had to check out at 11:00am and had to board at 4:00pm – what do we do with our bags in between??

We’d bought an hour of his time and he took us out along the road up to a local mountain. Some eider ducks nesting was on the way and the dog sled business had placed it’s dogs on guard so the arctic foxes wouldn’t come to steal the eggs or kill the ducks.

Further up the mountain we found tours of dog sledding, both on wheeled trolleys and then on the snow further up. Coal mines, satellite dishes for researching the ionosphere, an awesome views through the clear sky to the coast and over Longyearbyen. 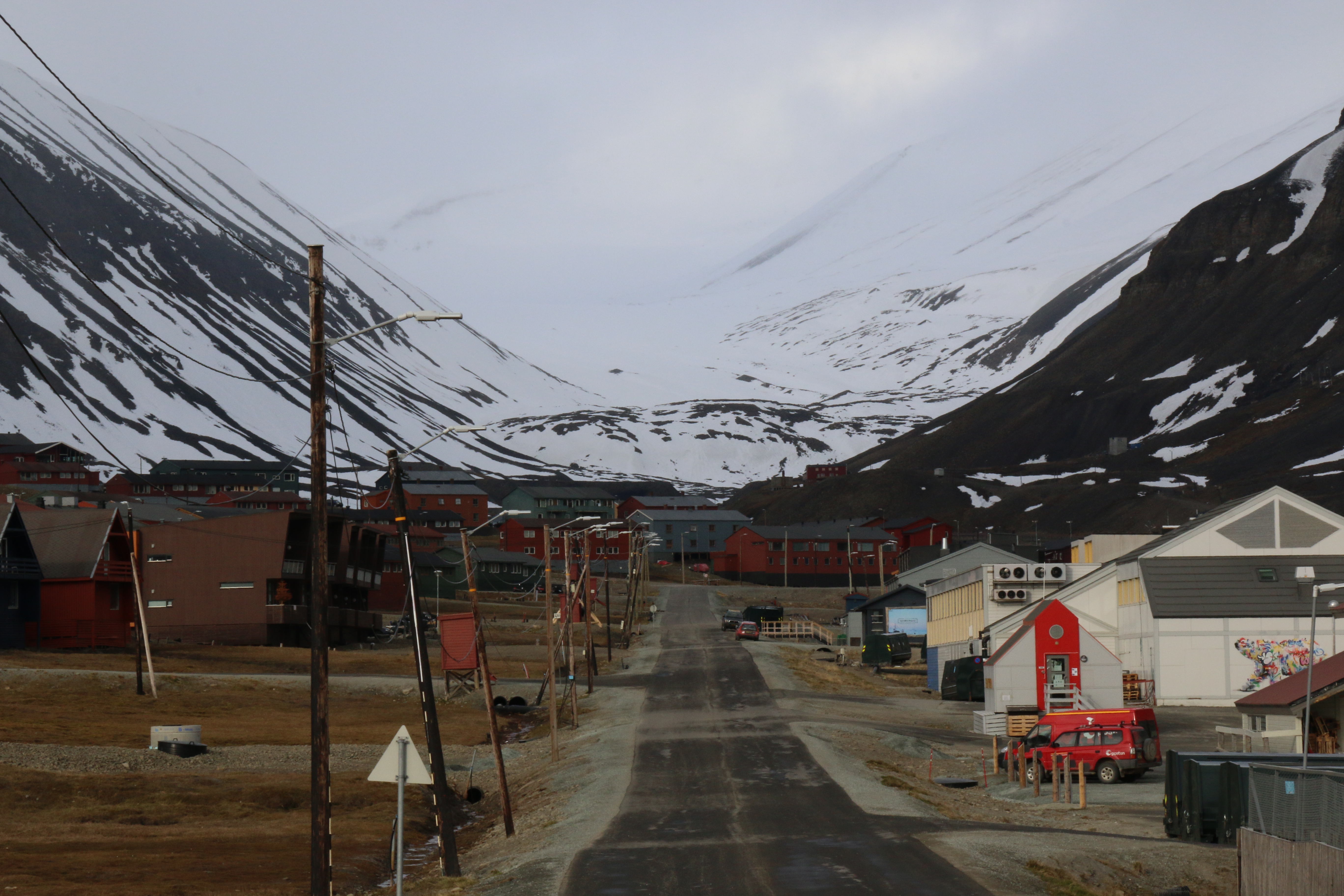 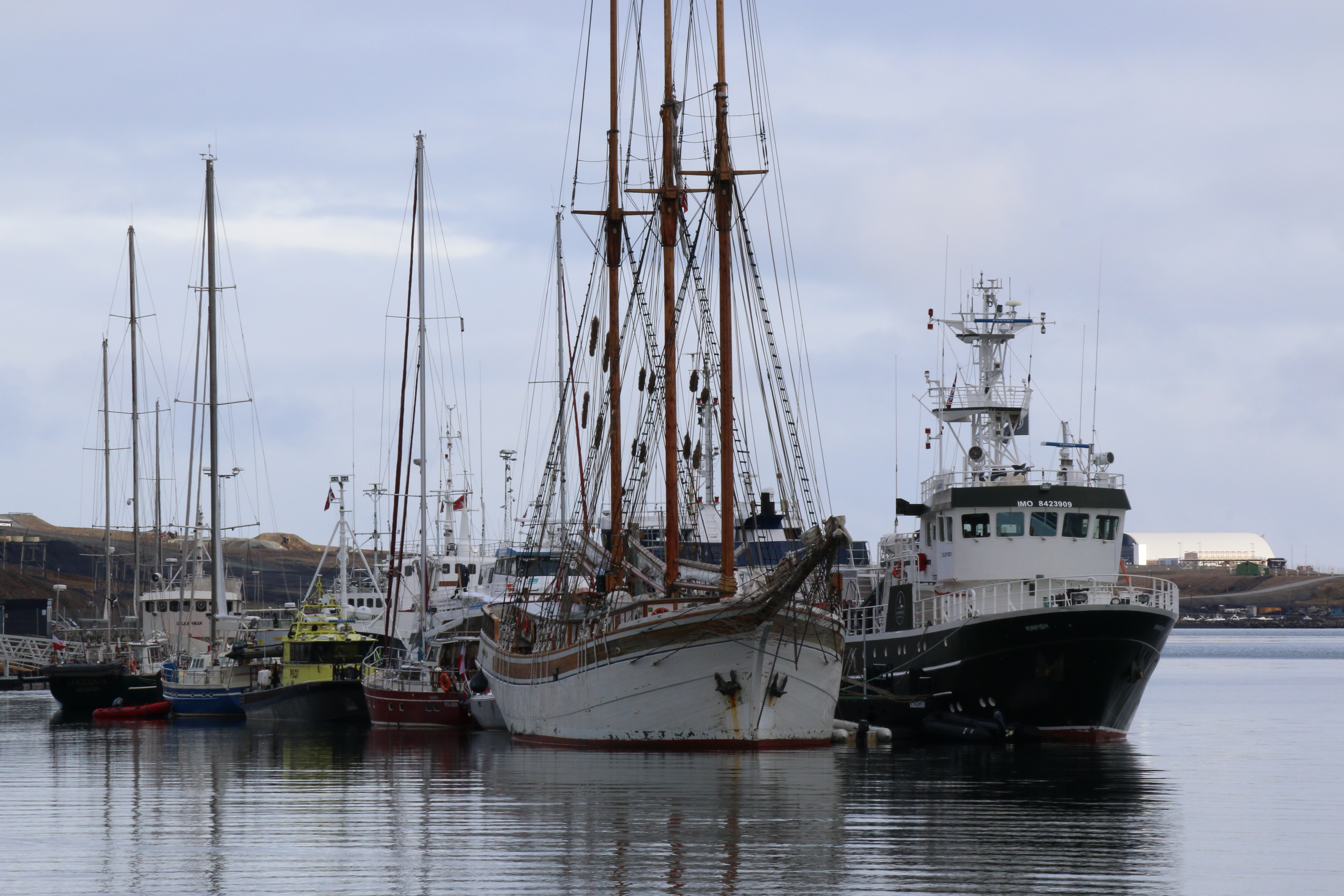 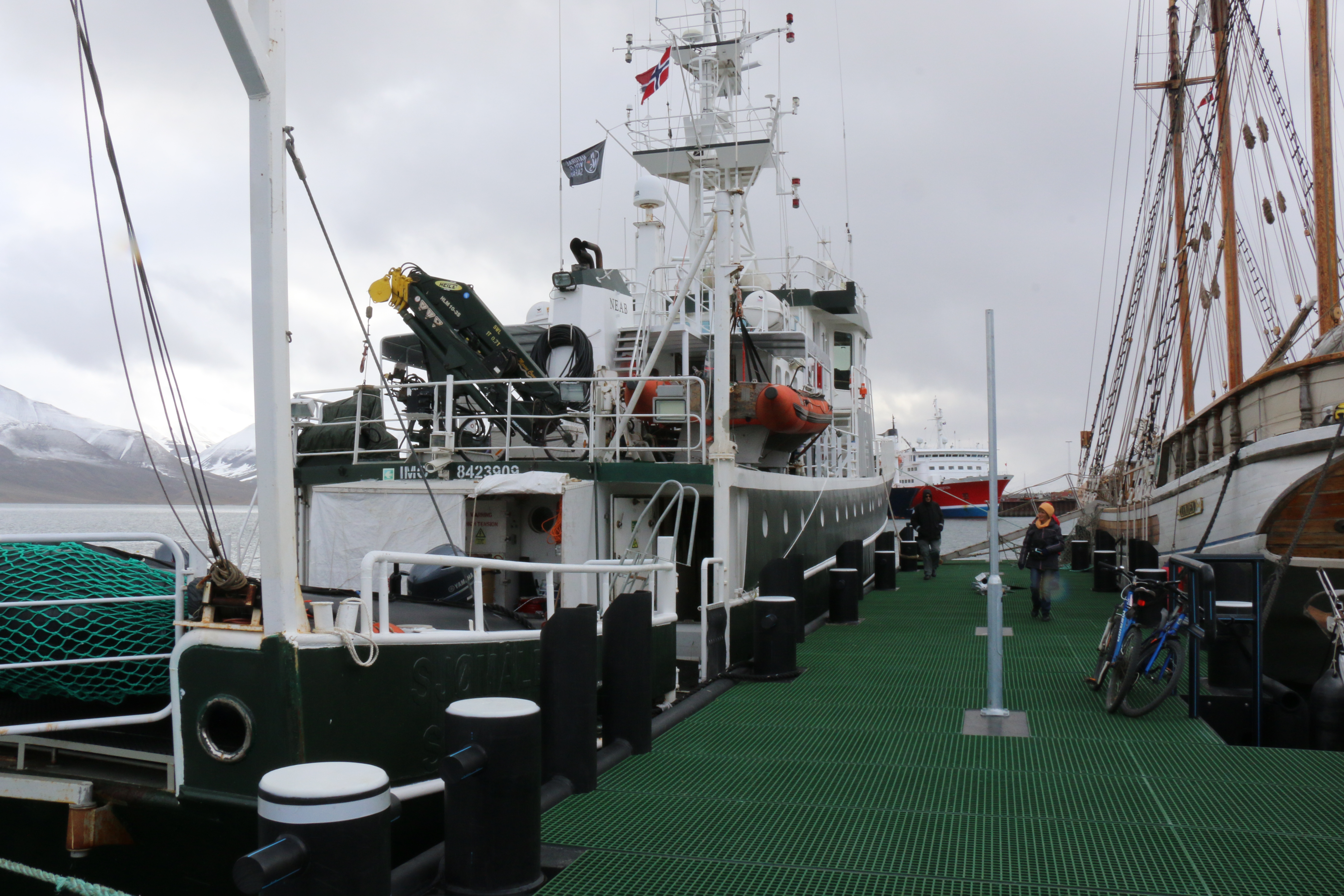 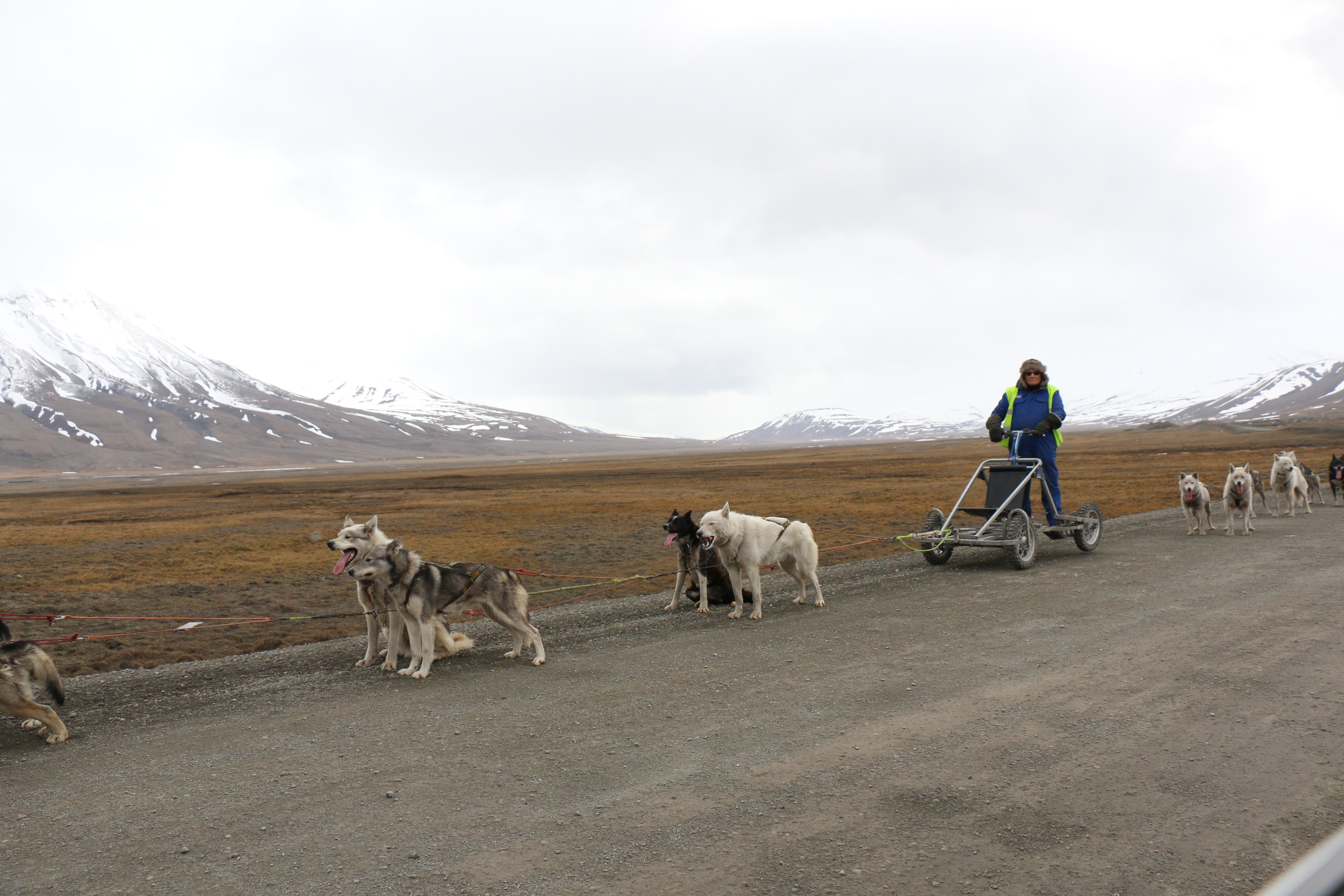 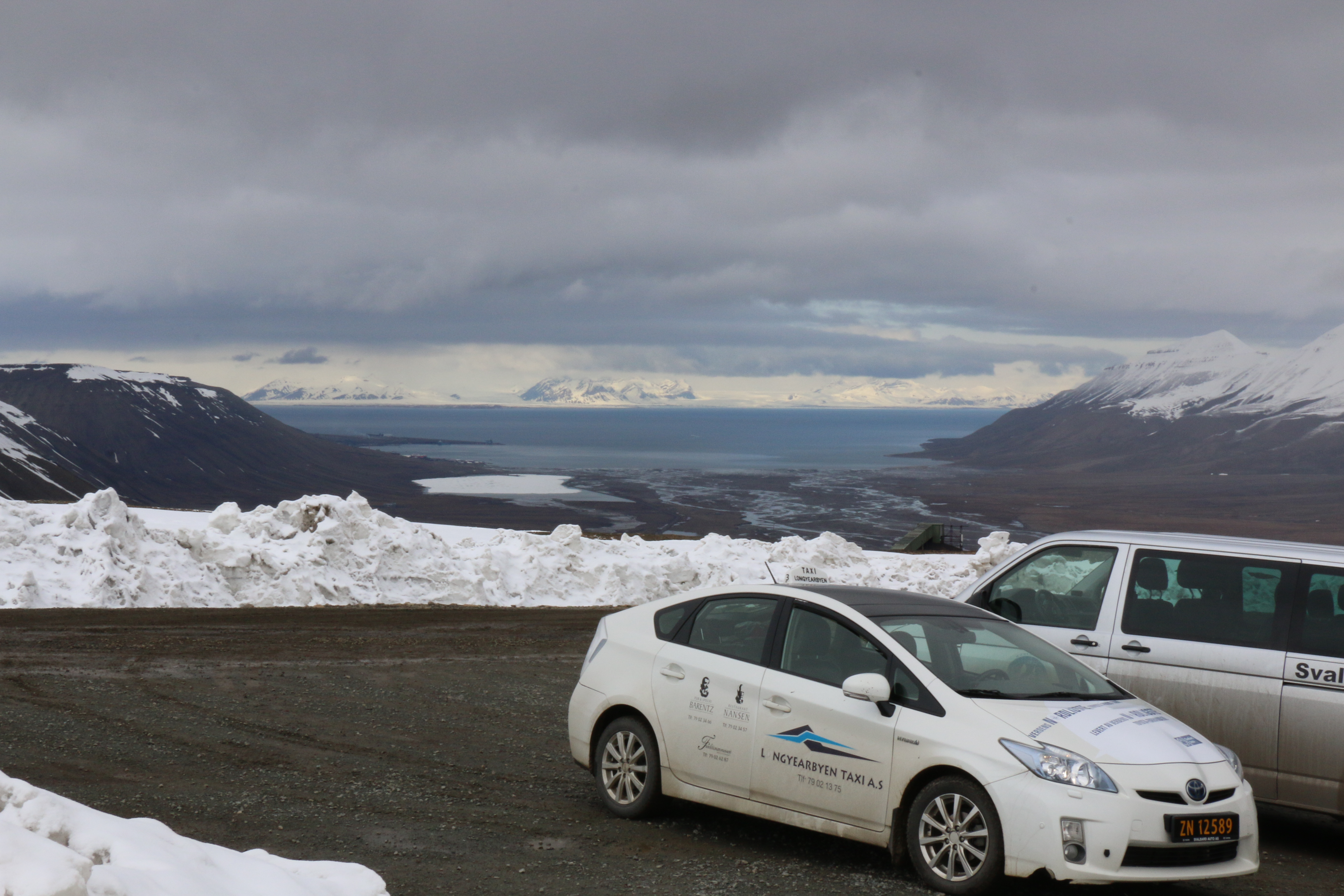 This cost us 600NOK per hour, which was quite reasonable given the four of us could share the cost.  Exchange rate is between 5and 6 NOK to A$. Curri dropped us in the village and we found a busy little cafe – everywhere is busy in peak season – and then we split up to go do different things. I visited the Svalbard Museum and the polar explorers exhibition. Both were okay, but I was expecting to see at least a mention of Sir Hubert Wilkins, Australian explorer, who achieved a great deal in both polar regions, but could not find any mention anywhere.

Curri returned right on time to take us to the Kinfish and we had a happy greeting of the other passengers at they arrived to the wharf. We were greeted by the five crew and two guides and started the process of settling in. I’m sharing with Sean, a retired neurosurgeon from Ireland. He is an avid photographer, huge tripod, two camera bodies and several LARGE lens. He’s not alone and several of our 12 have enormous lens and full frame cameras. Very jealous, in some ways. They don’t however, have a nice Sony Action Cam!

We had a long briefing from the captain and introduced to everyone. The boat owner Robin is on board too and shares the bridge watch with Caption Fred on a 6 hour rotation. For some reason, once we cast off, I felt most unsettled and not nauseous as such, just quite uncomfortable and needing the fresh air of outside, as chilled as it was. I think I had got too hot in all my cold weather gear, but inside the boat was a much warmer and comfortable temperature needing normal clothes.

After a very enjoyable dinner of cod, lying down was the only sensible option. We closed the porthole covers to keep the light out and both slept well. I rose at midnight and spent a couple of hours with Fred on the bridge – we can go anywhere which is pretty cool. I slept again and felt an awful lot better in the morning.