Beams of sunshine shone through the clouds at times, but like anywhere here, when the wind blows it gets uncomfortable.

Standard attire for an outing is long woollen thermals under jeans for the bottom, and two or three woollen thermals for the tops, layered with a shirt to make it all appear normal, a cheap fleecy top and dependent on the weather, my Mountain Designs waterproof hiking jacket for rain, or a quilted heavy overcoat with hood for windy weather. On my feet I have waterproof, i.e. Goretex membrane style outdoor hiking shoes and some nice thick socks. I wear my possum fur beanie and gloves once outside and the preparation is complete.

Trouble is that the cabins are pleasantly warm, so it gets very hot very quickly with all this gear on, and a quick disembarkation is called for. I’ll often carry a scarf to cover most of my face too, and must look a bit of a sight when waiting outside the souvenir shops – the Police haven’t questioned me yet.

So at Juneau, our tour started later in the morning and we had some time to spare. We walked about 2km into the centre of town, and first off was to head for the local library for their free wifi. Unfortunately it was closed until after our tour started. We wandered and killed some time in the state capital, which didn’t seem like a terribly flash place, and was picked up at the ship to go gold panning. This was my second and Kerry’s third time. Ho hum. We’d not realised this was the situation when we’d booked. However this time it was a lot better as we were taken up a gravel road, through a locked gate and to Gold Creek, where no one makes their fortune, but locals are building tidy amounts from their hobby time.

The first pan was pre prepared with a gold bearing sand and true to expectations, everyone found some colour, some glitter in their pan. The guide then loaded several pans for each of us with grit he’d just dug from the creek. I was quite chuffed to get a few flecks from that as well – neat. It’d be a fun way to spend a few hours  – perhaps just not days months and years in rainy bleak weather….. 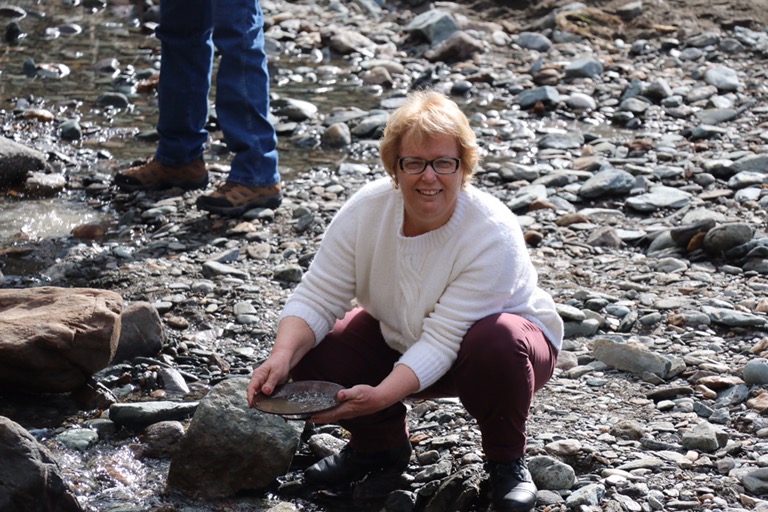 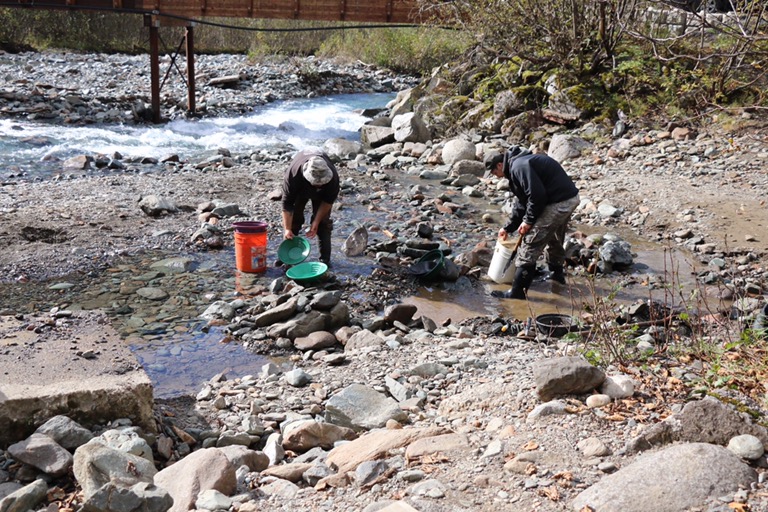 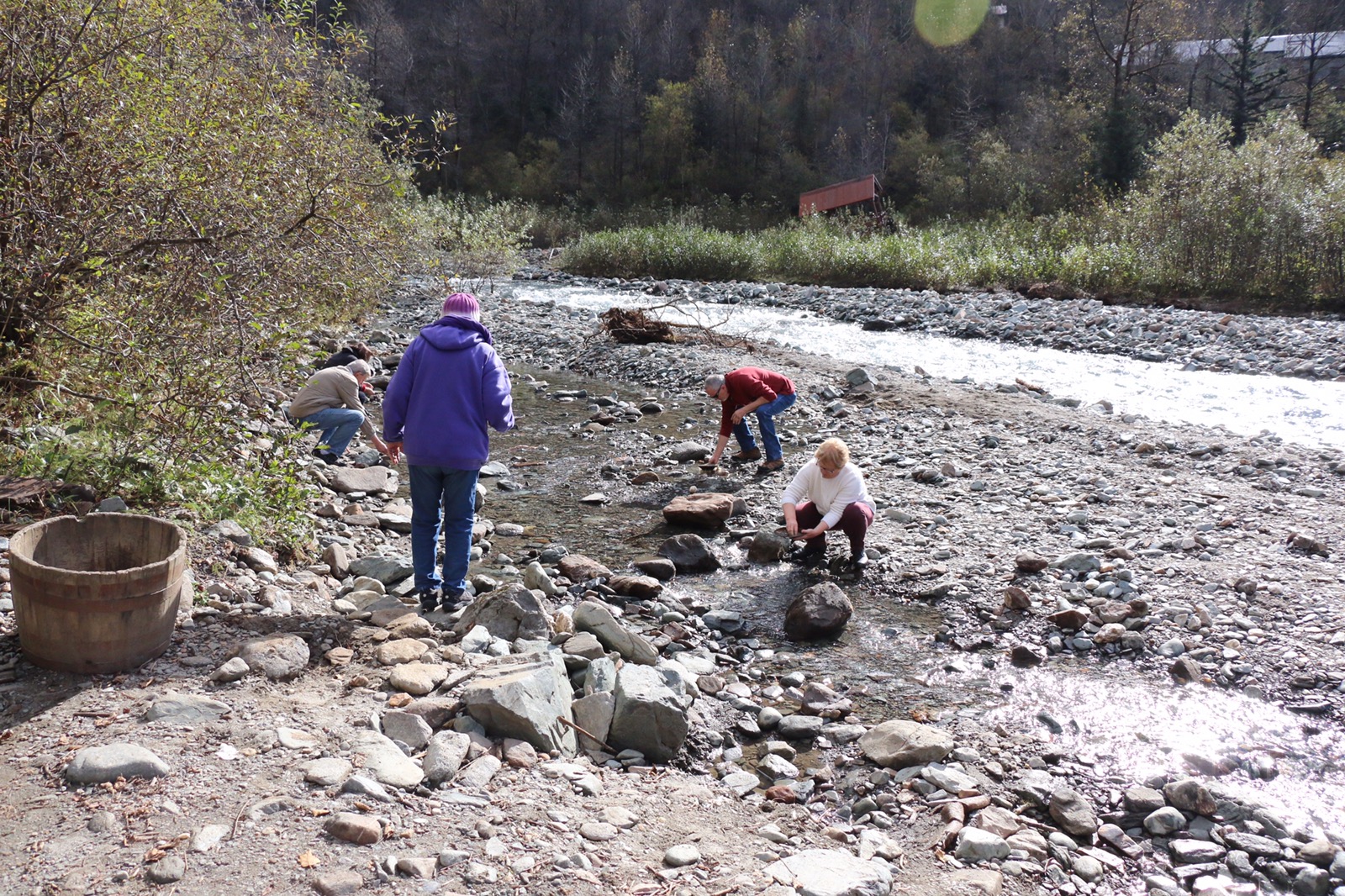 I’m pleased we did this little tour, it was a bit more authentic than hundreds of tourists lined up at troughs

Our guide dropped us off at the Salmon Bake, which was a nice alternative to on board eating. Here was a nice fire going, a well laid out outdoors eating area under cover and about fifty people at an all we could eat. The nice pink salmon was proper fish, it had bones and covered in a very sweet maple syrup and sugar dip.

Hidden away behind the kitchen was a delightful stream and waterfall 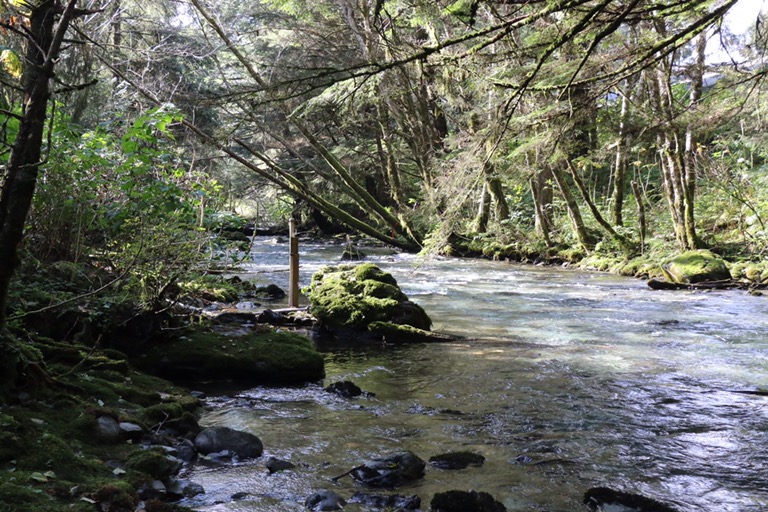 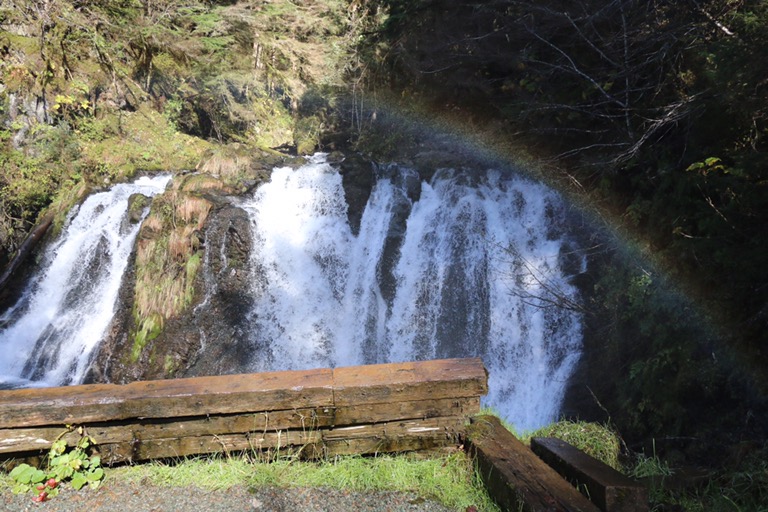 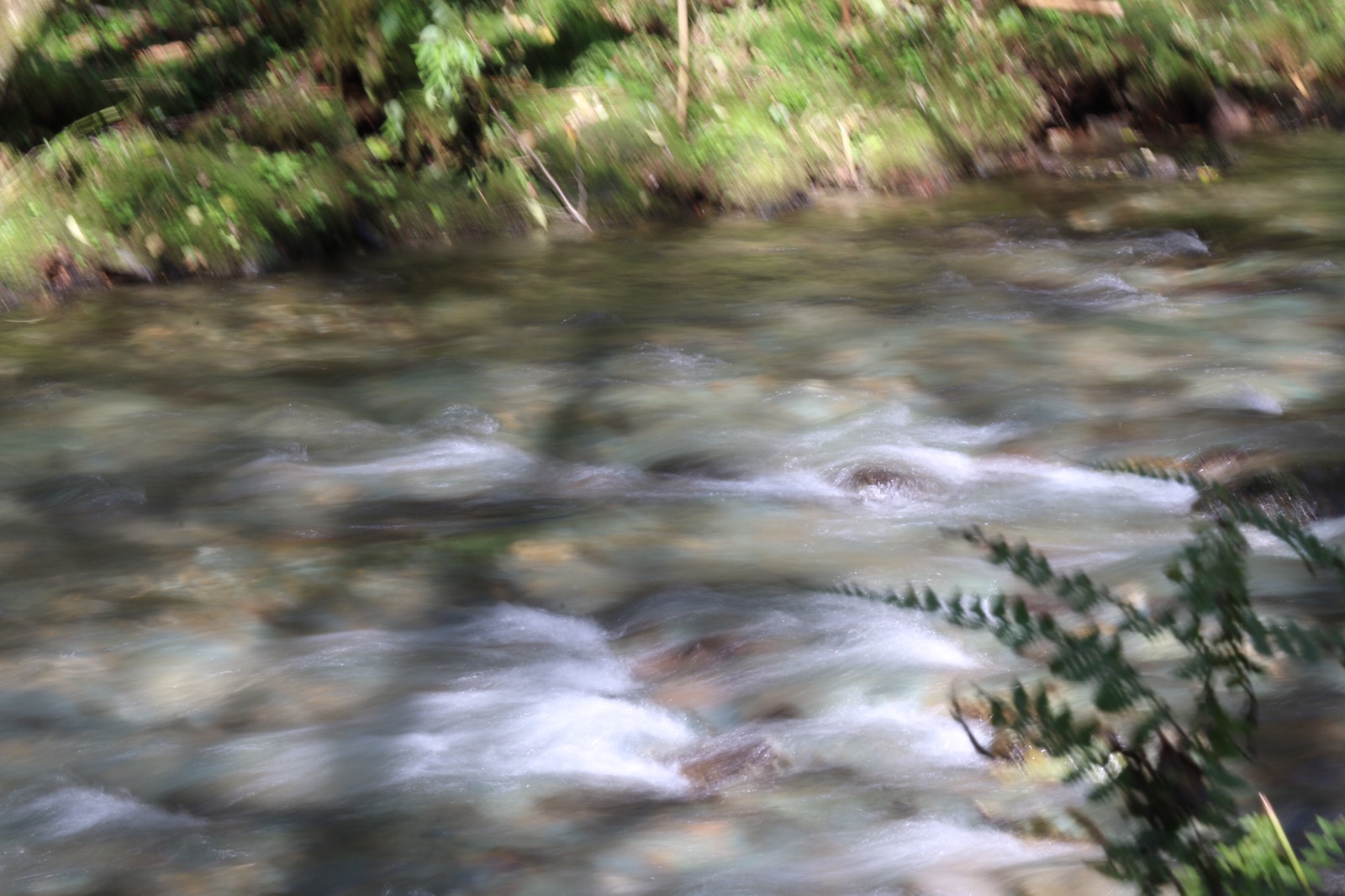 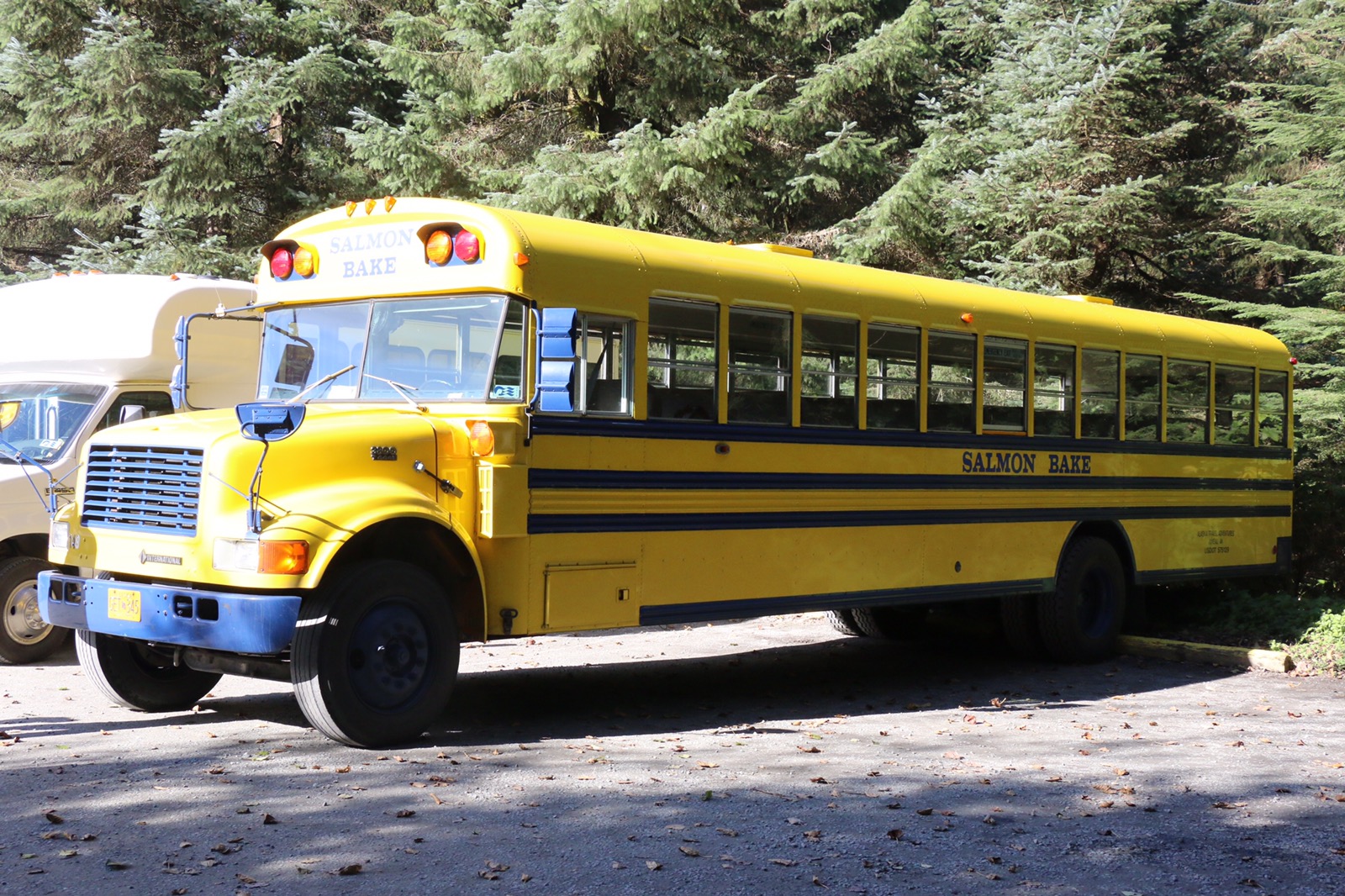 Our captain had asked us to return to the ship early so he could leave and get into Ketchikan and dock before weather arrived, so we whilst we didn’t feel too rushed, we had less time in Juneau than initially planned. The driver taking us back to the ship was normally a fisherman who was full of woe at the build up of whales who are eating all the baby salmon, the proliferation of cruising tour company jewellery stores on the waterfront pushing up the rents for the local companies, the lack of training up of new marine mechanics and the dodgy behaviour of the locals to the point where he found it better to fly up a proper mechanic from Seattle to spend a few days fixing things properly. Chatting to him after all the passengers got off, he complained at the lack of benefits to the local community from the vast volumes of people who come into town – 2,500 – 4,000 per boat with three or four boats a day.

Being outside in the cold got to me, and unfortunately the water in our cabin shower was not steamy hot this afternoon, so I faded quickly in the evening. A ventriloquist show was on in the showroom and, like the comedy act we’d seen a few nights before, it was quite good and a fun night out – apart from being partially zonked out on pills and what someone called bronchitis.

A light dinner at Horizons and off to bed.