Thick fog and the boom of the ships fog horn greeted us this morning as we headed for Glacier Bay.

My preparation with loading off line mapping is paying off as I’m much more comfort knowing where we are on a map. I missed this on our trip two years ago to east Asia and Russia, hence felt quite confused about directions and locations.
‘Horizons’ serves us well for breakfast, with a proper coffee at the international cafe on the way. Well it’s sort of on the way. We are mid ships level ten. International cafe and she of the hot toddie, Tatiana, are on level five, so we make our way down the ample stairway, back and forth, back and forth zigzagging down the decks. By the time we reach the fifth, we have no deal which is fore or aft, left or right or which way the ship is going. Reasonable signage helps.

‘Horizons’ is on the 14th deck. Despite there being no 13th deck, it’s still a lot of stairs to climb, so sometimes the lift is called. It quickly fills with people who’s stair climbing is well behind them and we stop to let one off after one deck. Who knows how they’d cope in an emergency. We note we are getting fitter and puffing less after a few days of this exercise.

Breakfast choices made and consumed. Plenty of healthy options available, it’s keeping each option to one serve is the problem!

Sailing on dead calm waters, the fog lifted and we could see both sides of the bay. 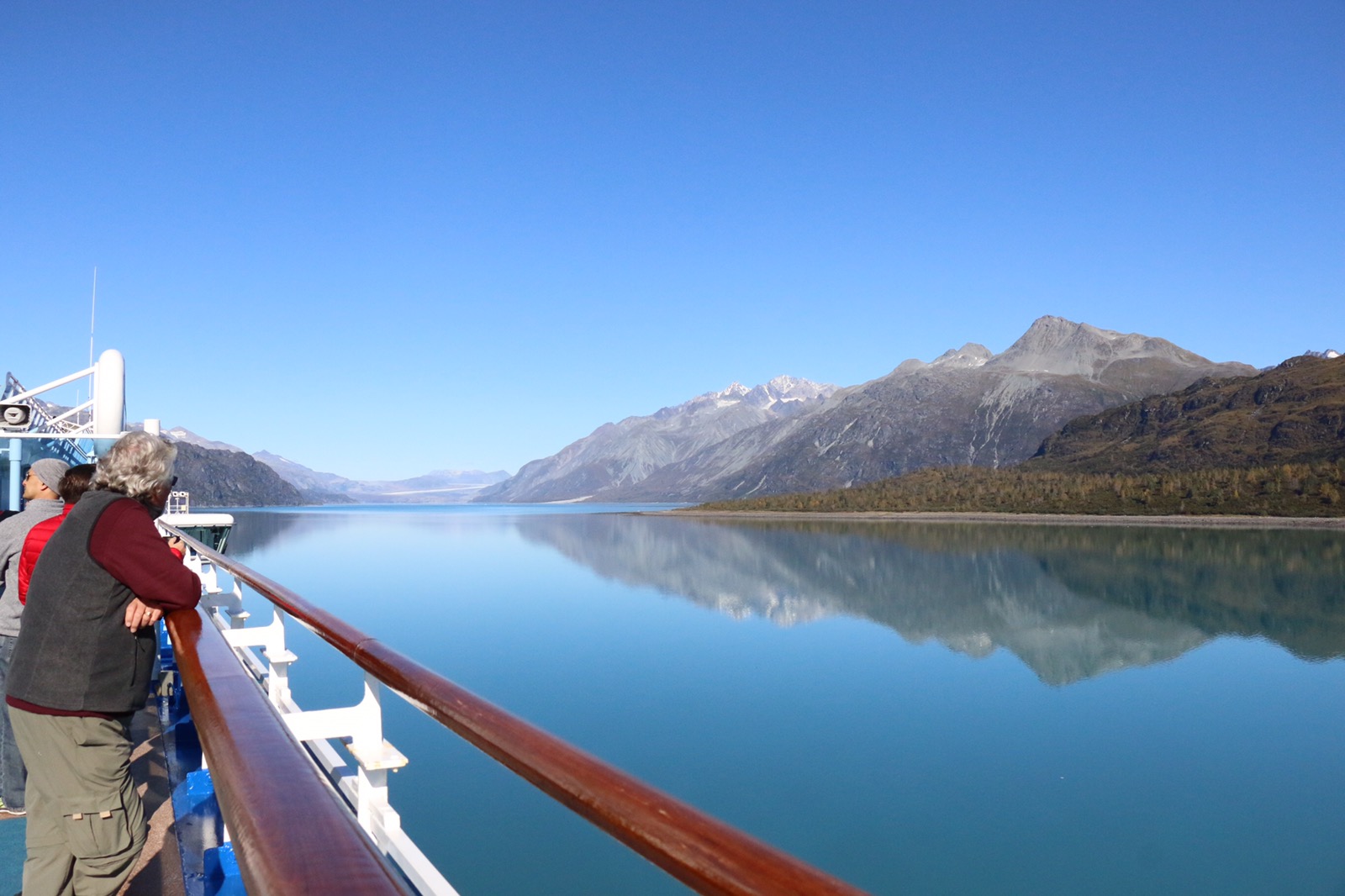 We heard Ranger Mike Talk about becoming ‘resident’ in an area, and how important this is to become appreciative of what surrounds you. Becoming resident means you understand how to care for the environment and the people in your locality. It’s a similar philosophy to mindfulness, and also with Taiya Selasi’s TED talk that I’ll make a link to ‘don’t ask me where I’m from, ask me where I’m a local’

The boat parked up beside two glaciers. Marjorie Glacier was one. 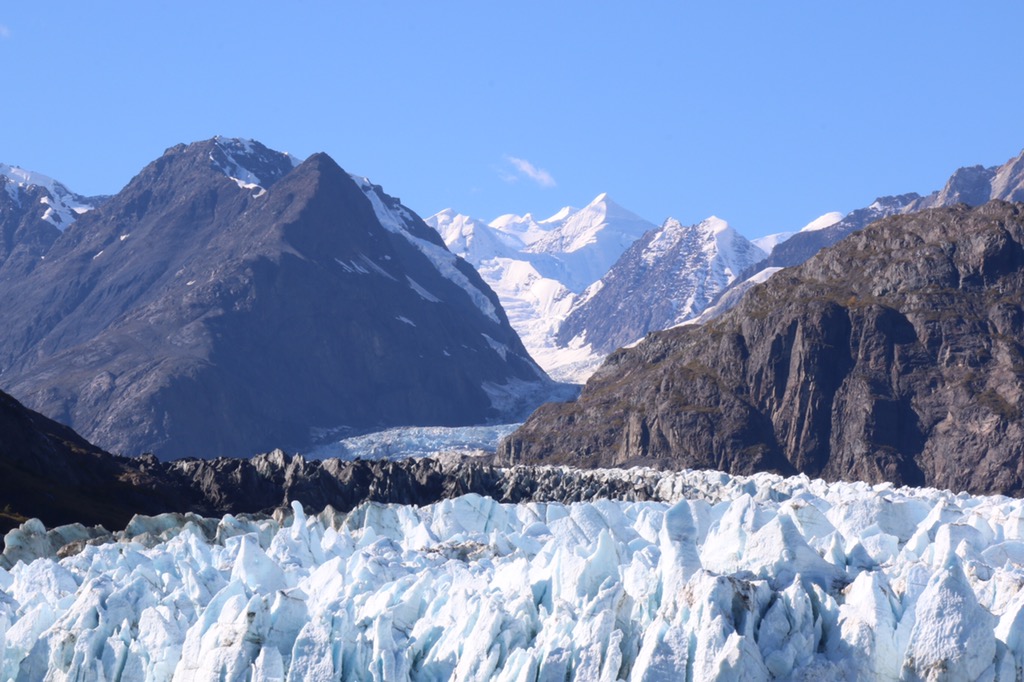 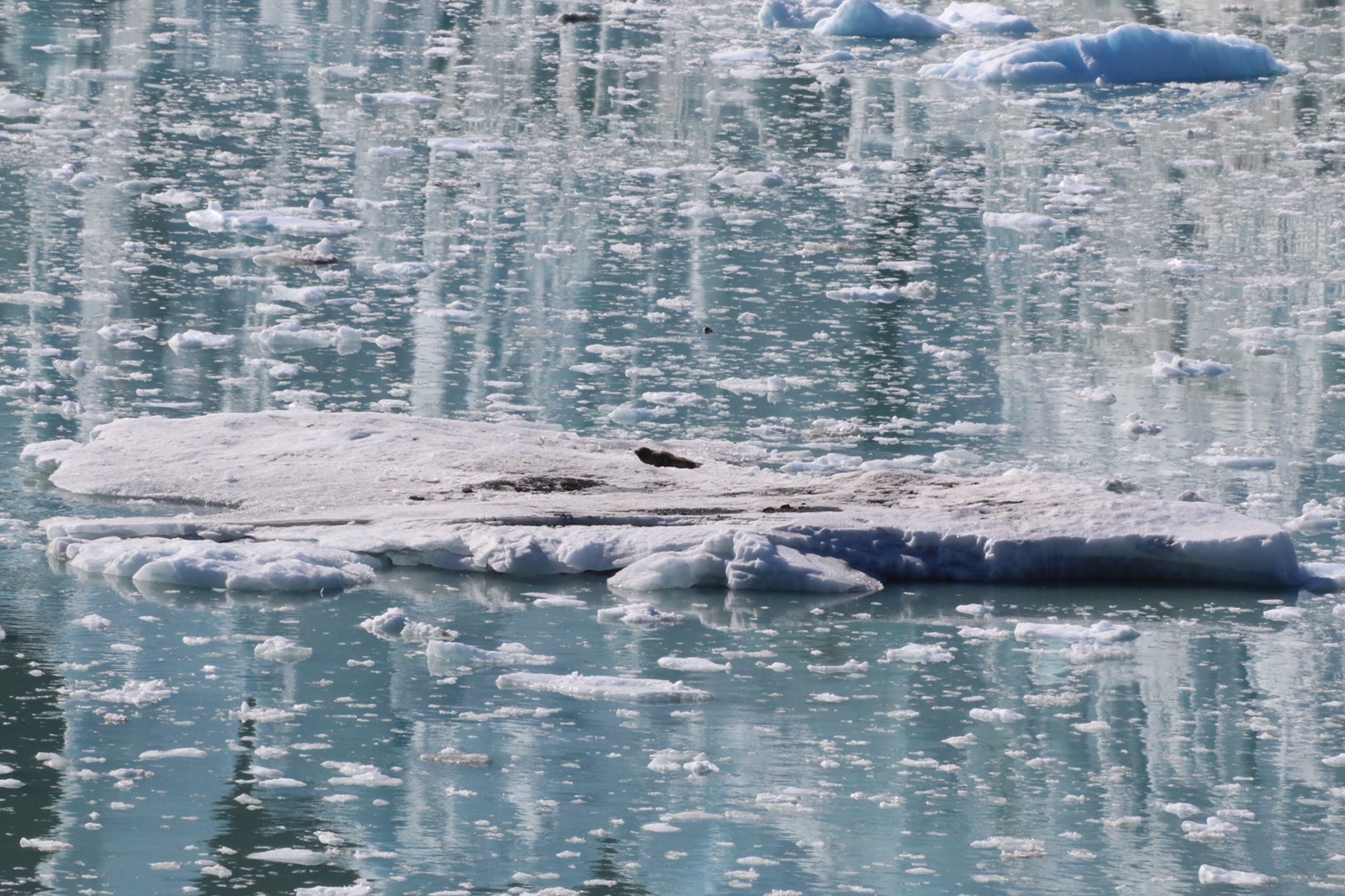 Given the day was glorious, have I said that? Once the fog burned off, it was a bright sunny day, not hot at all and still chilly if at the front of the ship and in the full breeze created by its momentum. The captain seemed pleased with this weather, and given it was the last tour of the season from Alaska, we also visited John Hopkins Glacier which apparently is a special event and only done this once this season due to not wanting to disturb the population of sea lions. More gazing at arid landscapes, whilst napping in the soft warm sun, a very pleasant day. 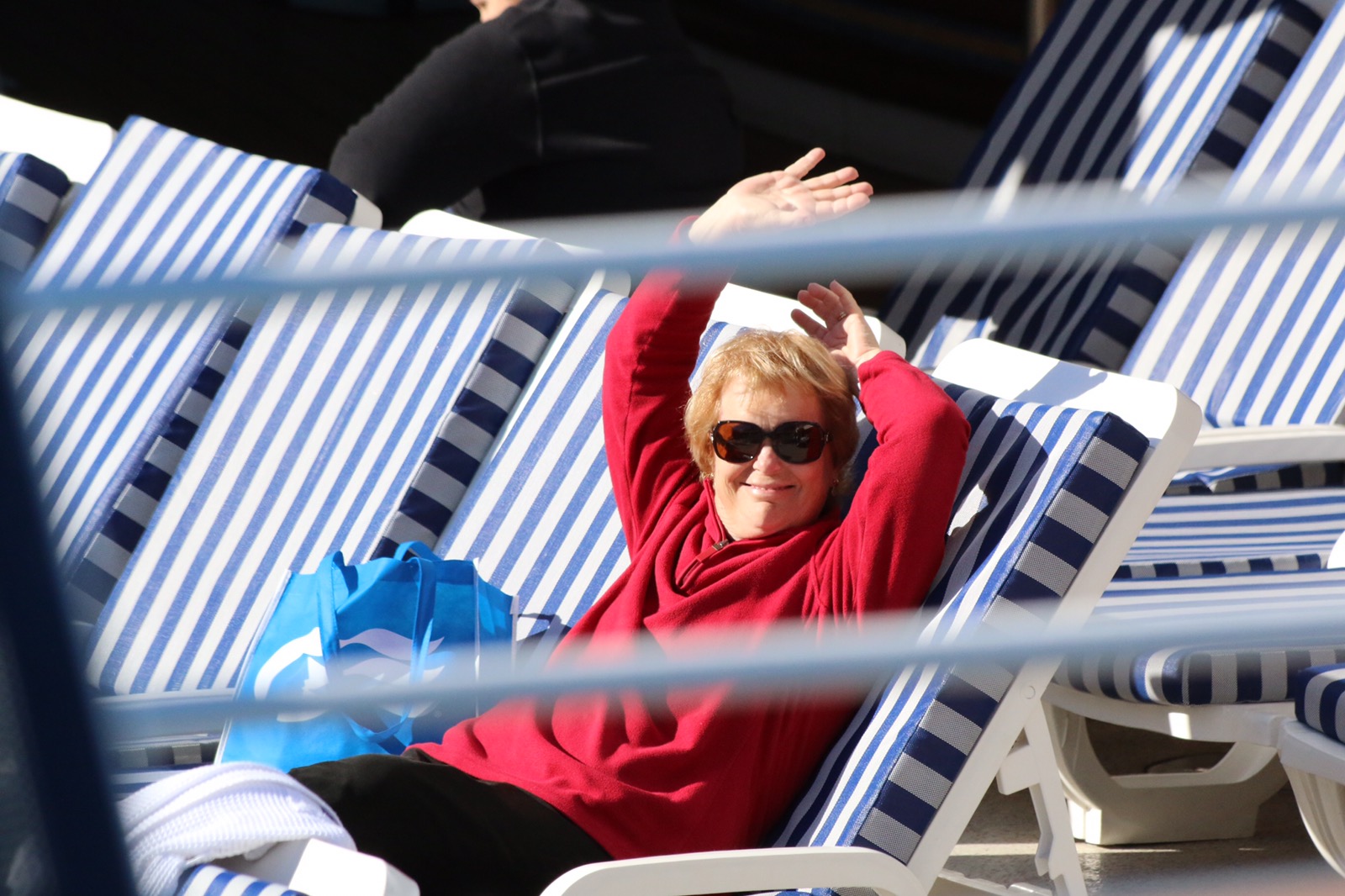 Horizons for dinner. Moved tables to get away from a whining couple, ate too much and called past Tatiana on the way back to the cabin, AKA stateroom, for my special treat and very strict instructions to not drink it at the bar but instead take it back to my room and drink her potion immediately before getting into bed. Spaceba Tatiana …

The captain called everyone late at night, around midnight. By the sound of him, he’d been woken from a hot toddy induced sleep too. ‘The Northern Lights are on the starboard side. Please dress warmly’

Seriously, yay. This was not to be missed and a hurried collection of thermals and jackets was asssembled with little care about appearance. As I’m finding my bits, tripod, torch etc, thoughts of instructions read on the plane a week ago churned over. Lens filter off, manual focus on, stabilizer off, 5 second exposure, 4000 ISO, wide open aperture, I’m sure there was more

Fortunately we’d been exploring earlier and found a basketball court high at the back of the boat with a bit of a clear walkway around, and headed there. Infinity manual focus. Ummm, hard to do in the dark. Settings all darkened out, Kerry shining torch enough to show the buttons but not lose night vision. Bright moonlight. The  first set of photos were, well, not so good. We changed sides, found a point to set the infinity focus and away we went. The lights are a bit of a smudge to the naked eye, but once the camera is set, it comes out kinds cool. 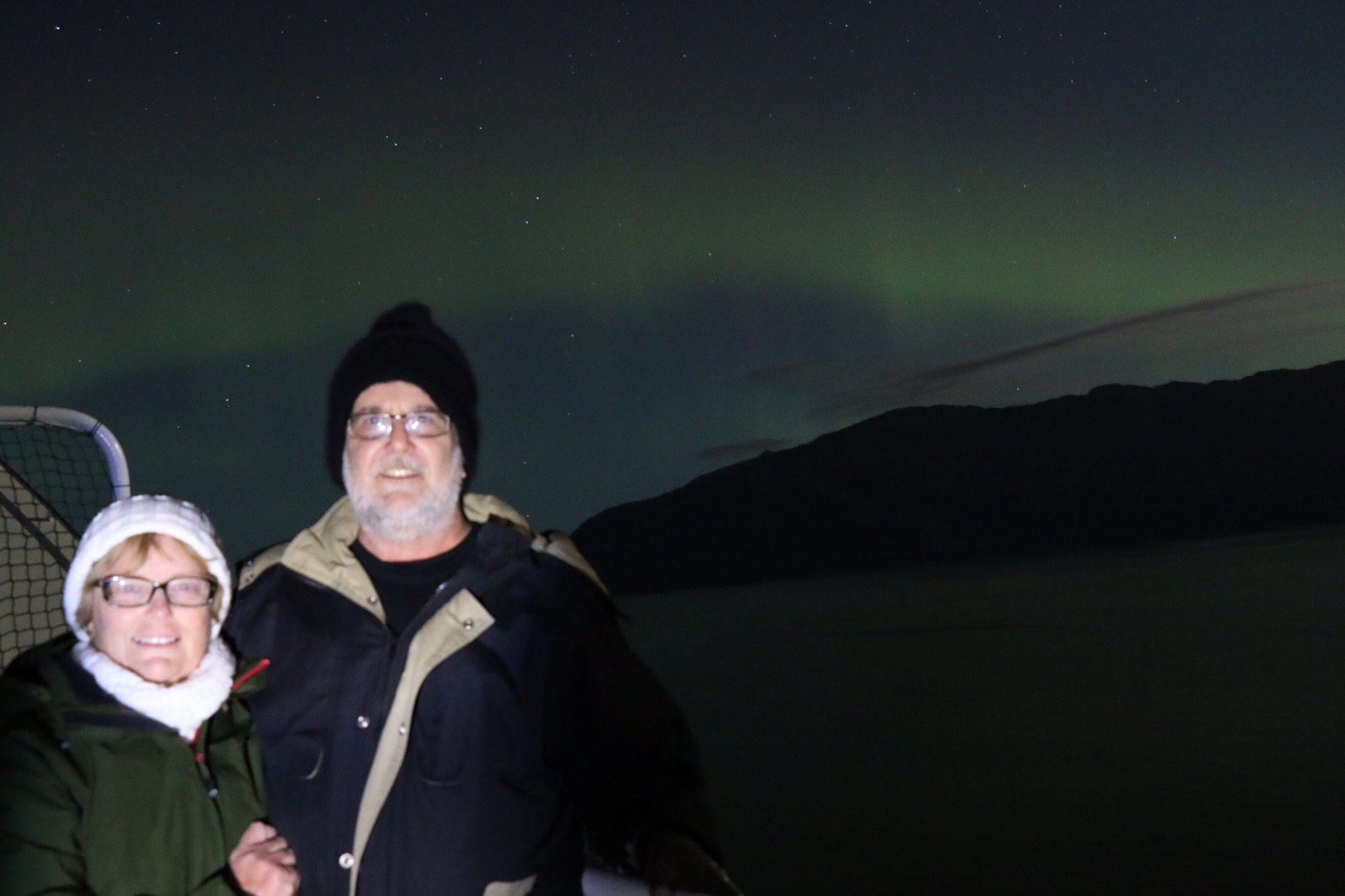 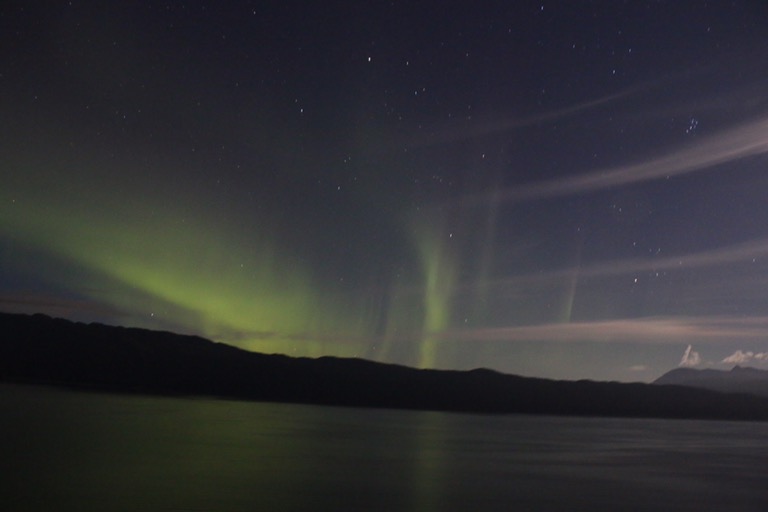 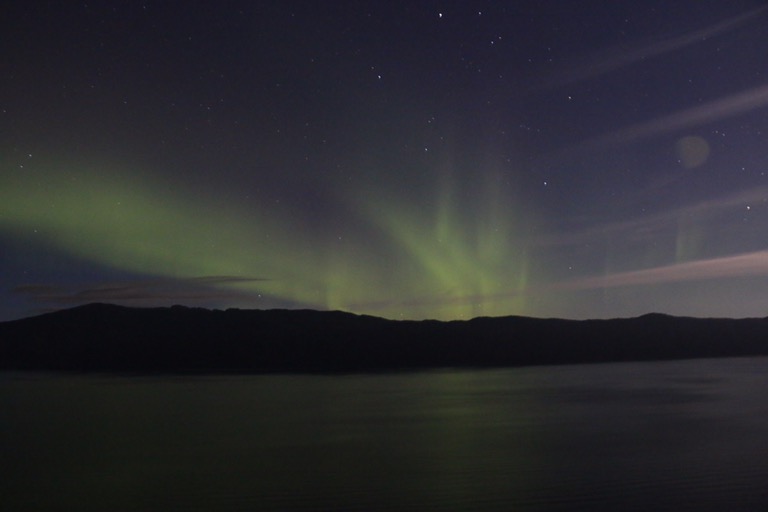 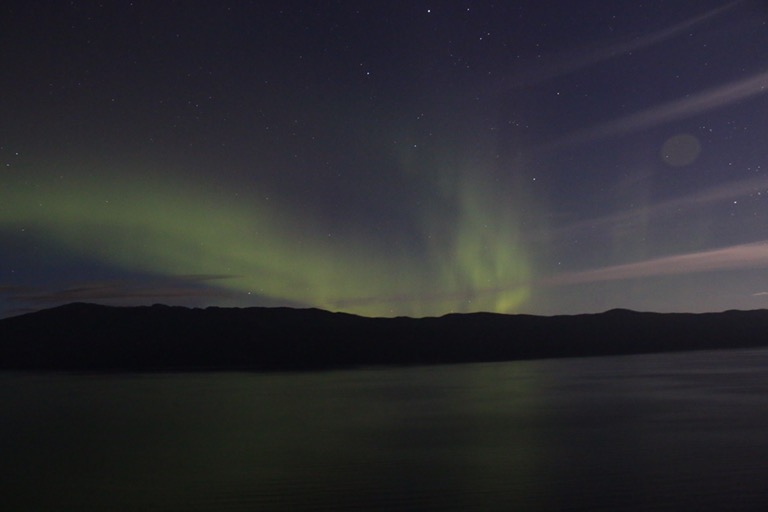 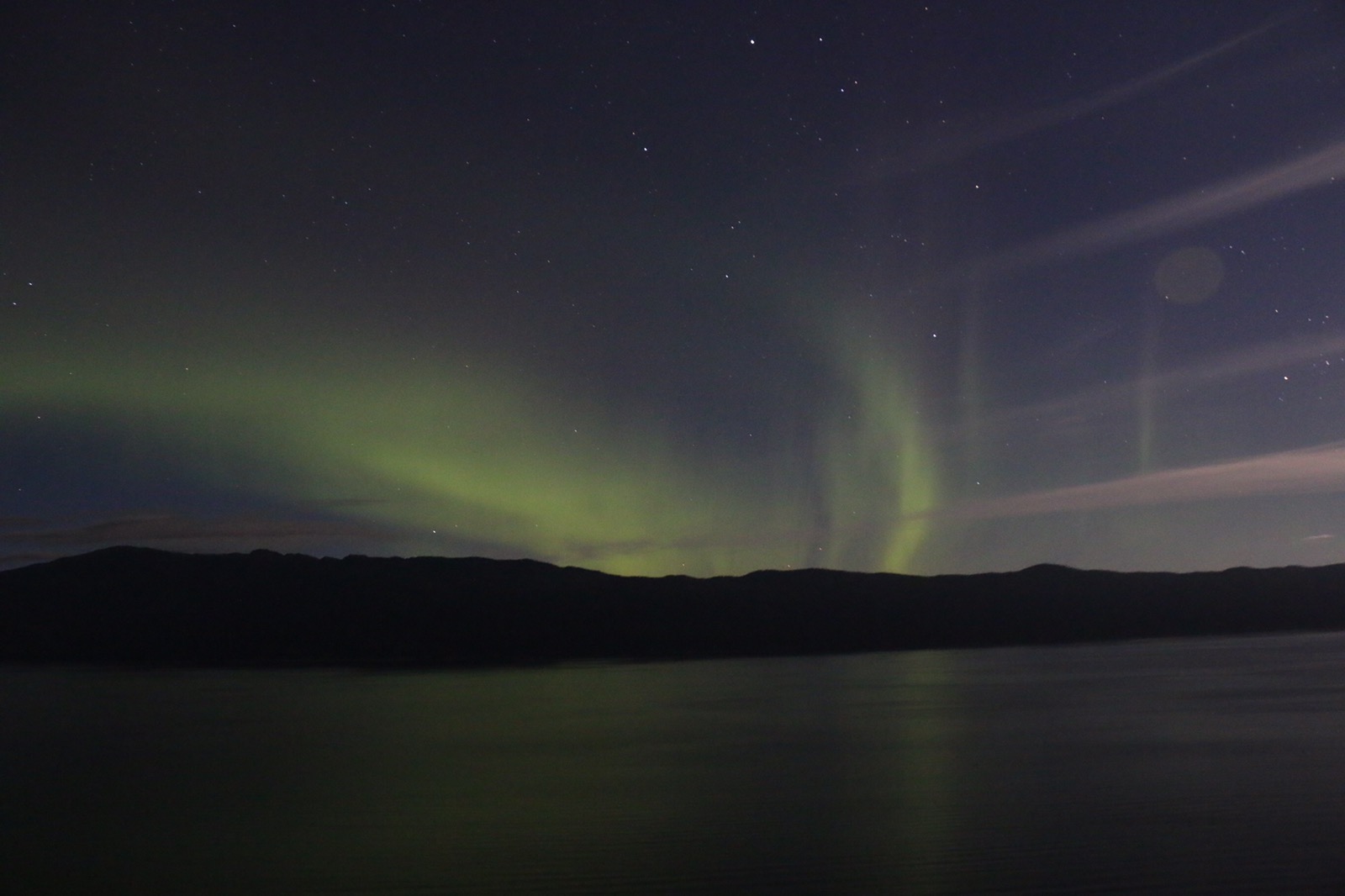