As expected, today was a transport day from Mt Kinley Lodge, heading south in a bus to Talkeetna and onto a glass topped train for a ride to Anchorage and the port of Whittier. Other cruise ships port at Seward. Anchorage tends to be too tidal, 10 metres tides like Broome, to suit cruise ships.

Bus drivers and other staff are so excited to see us leave, we are the last group leaving to the south. Season closing soon for them.   Despite all of us apparently moving to the same end point we keep on seeing different people arrive so there is no sense of a ‘group’. This means there are plenty of new comers to repeat the same stories with – oh you’re from Australia, that’s such a long way….

Bus train changeover points down a gravel road to a very temporary looking stopping point. I guess we’ll be safe…. 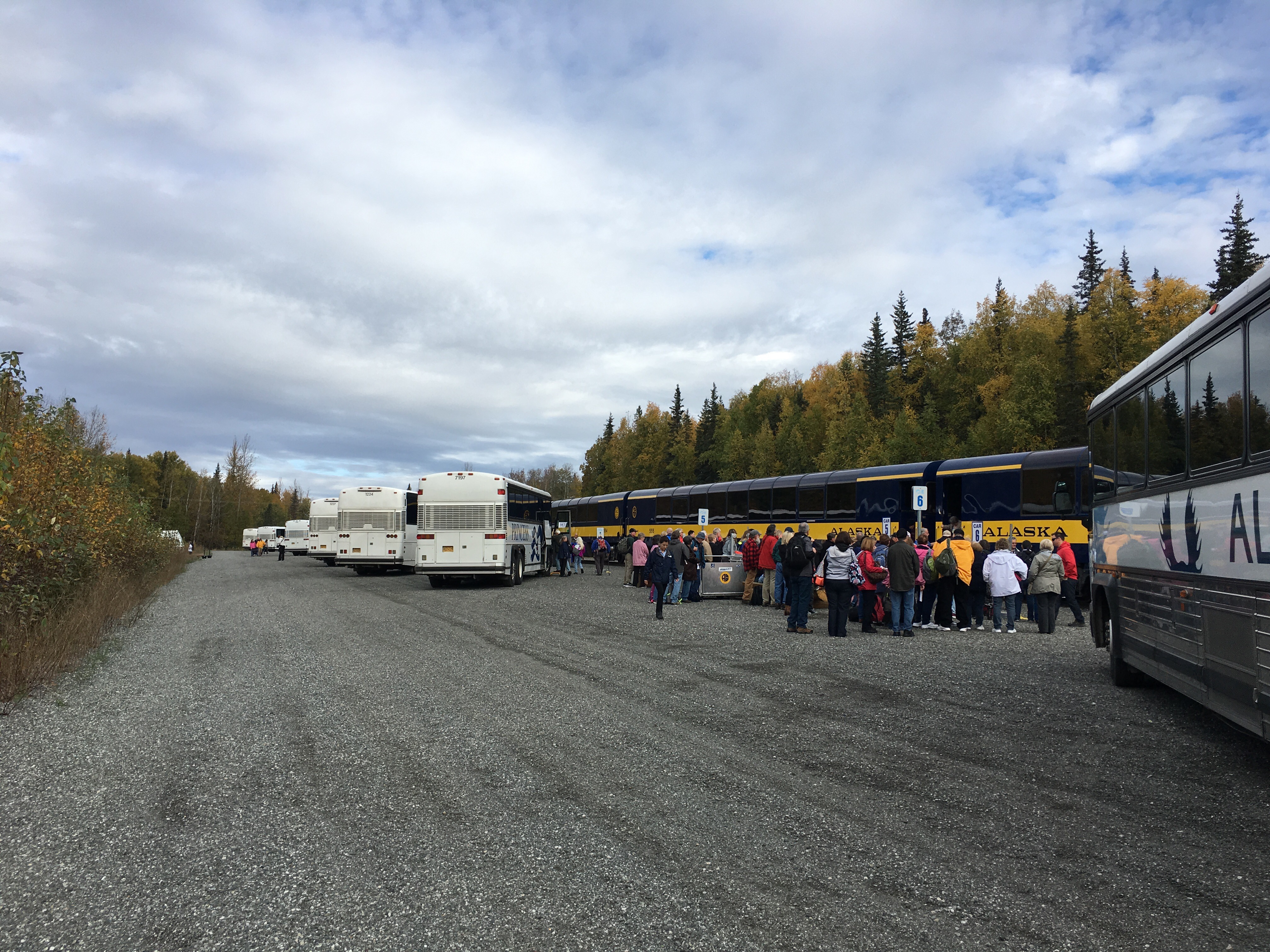 Seated on the train with a couple who were entertaining enough to chat to. Towards the end of the trip, a shipping/port/customs type person came on and we found the other couples surname matched that of a couple who went missing on the first day and led to a half hour delay as they were trying to be found. They never were at the time – but have reappeared now. I might get around to asking them what they got up to. 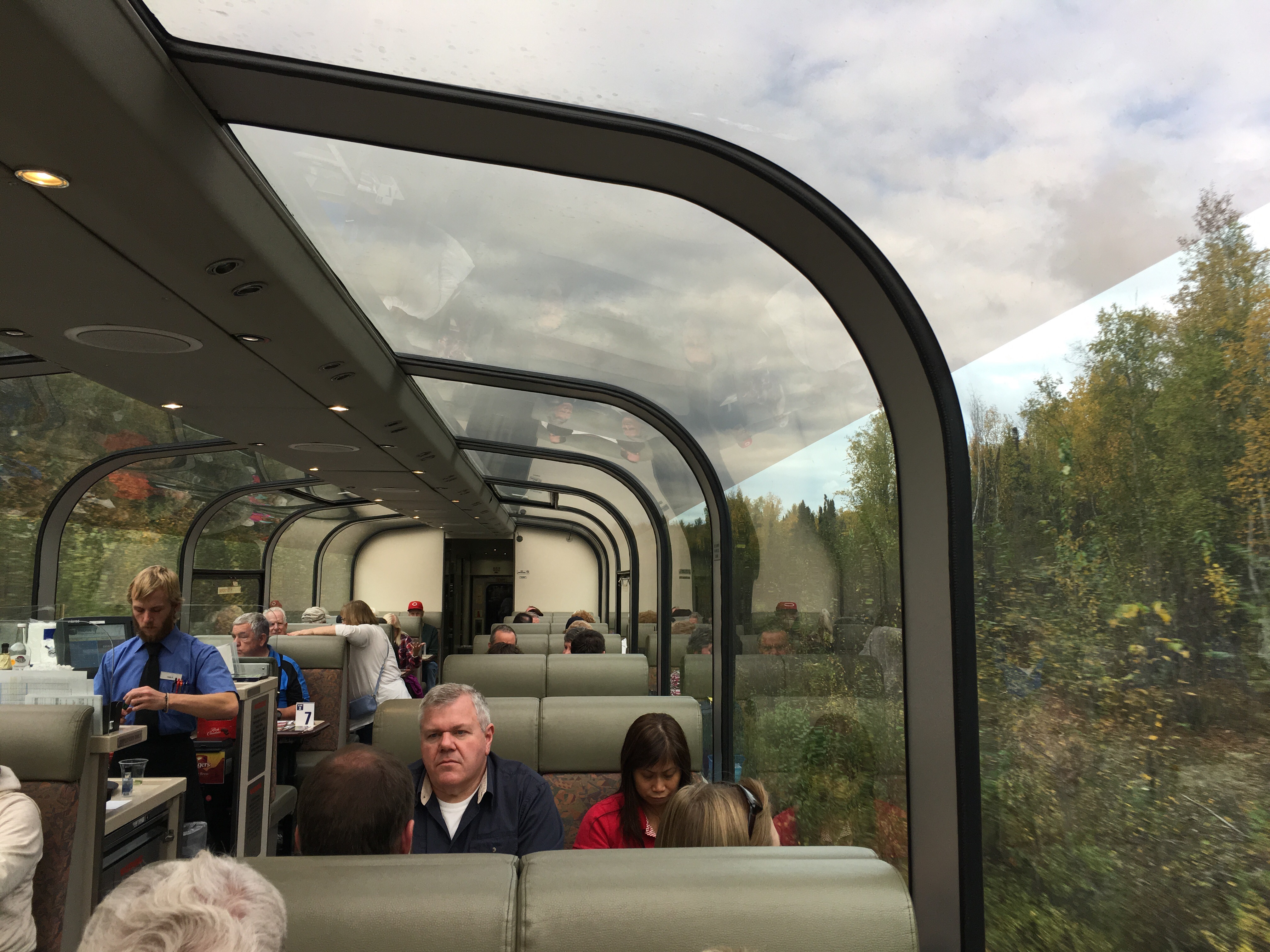 The train ride was pretty in places especially after we past by Anchorage and the line followed the coast with steep mountains on one side a small sliver of land carrying road and rail before the ocean. Figures quoted of -40°C being common in winter and 10metres of snow. A place for the intrepid. We learnt many things about how Alaska had the biggest in the USA and the world.

After around 5 hours we emerged from the tunnel close to the small port town of Whittier to see our little boat off in the distance. It was exciting to see as last as we move from one phase of our holiday to the next. No more early starts to pack up bags. 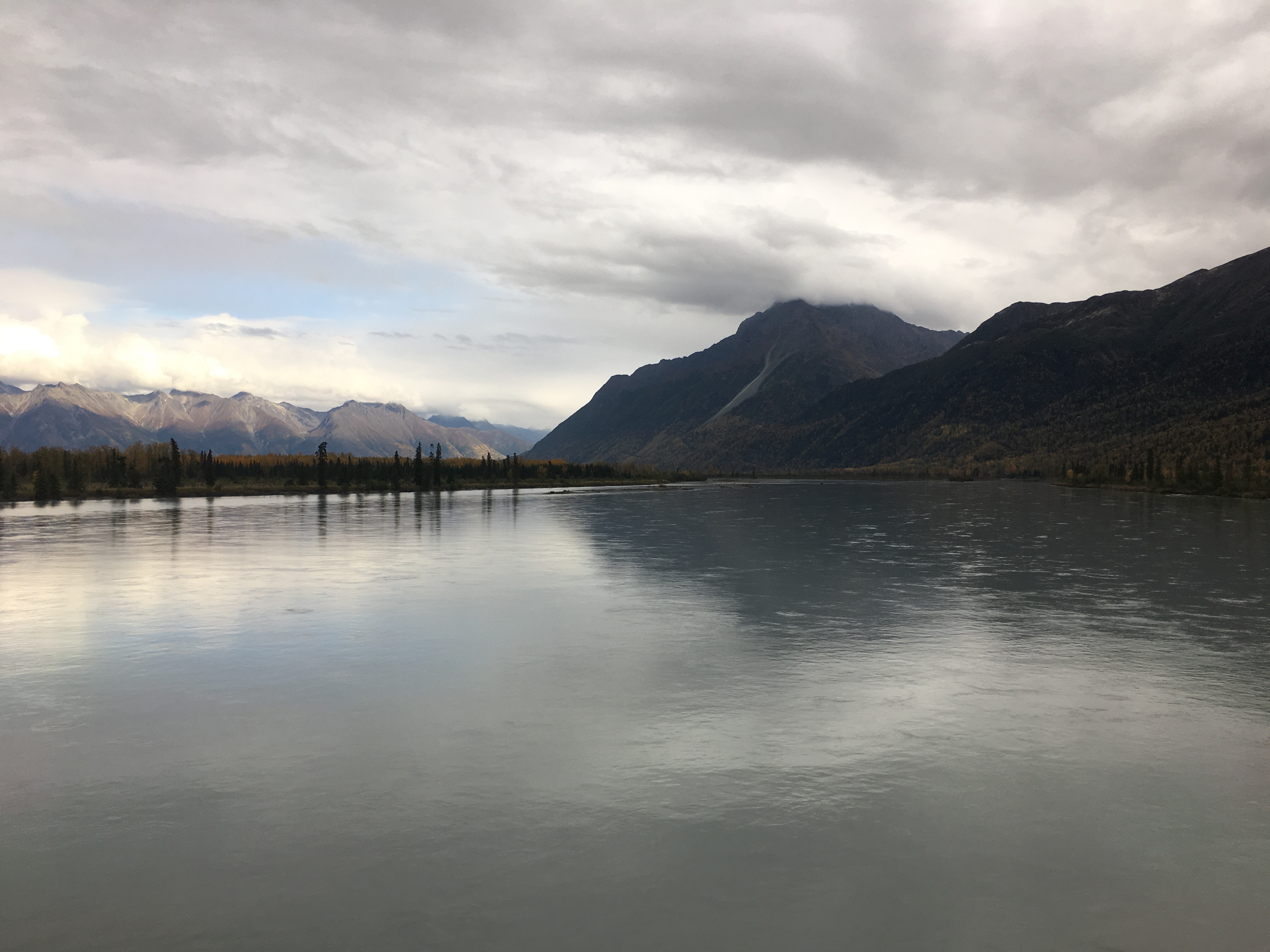 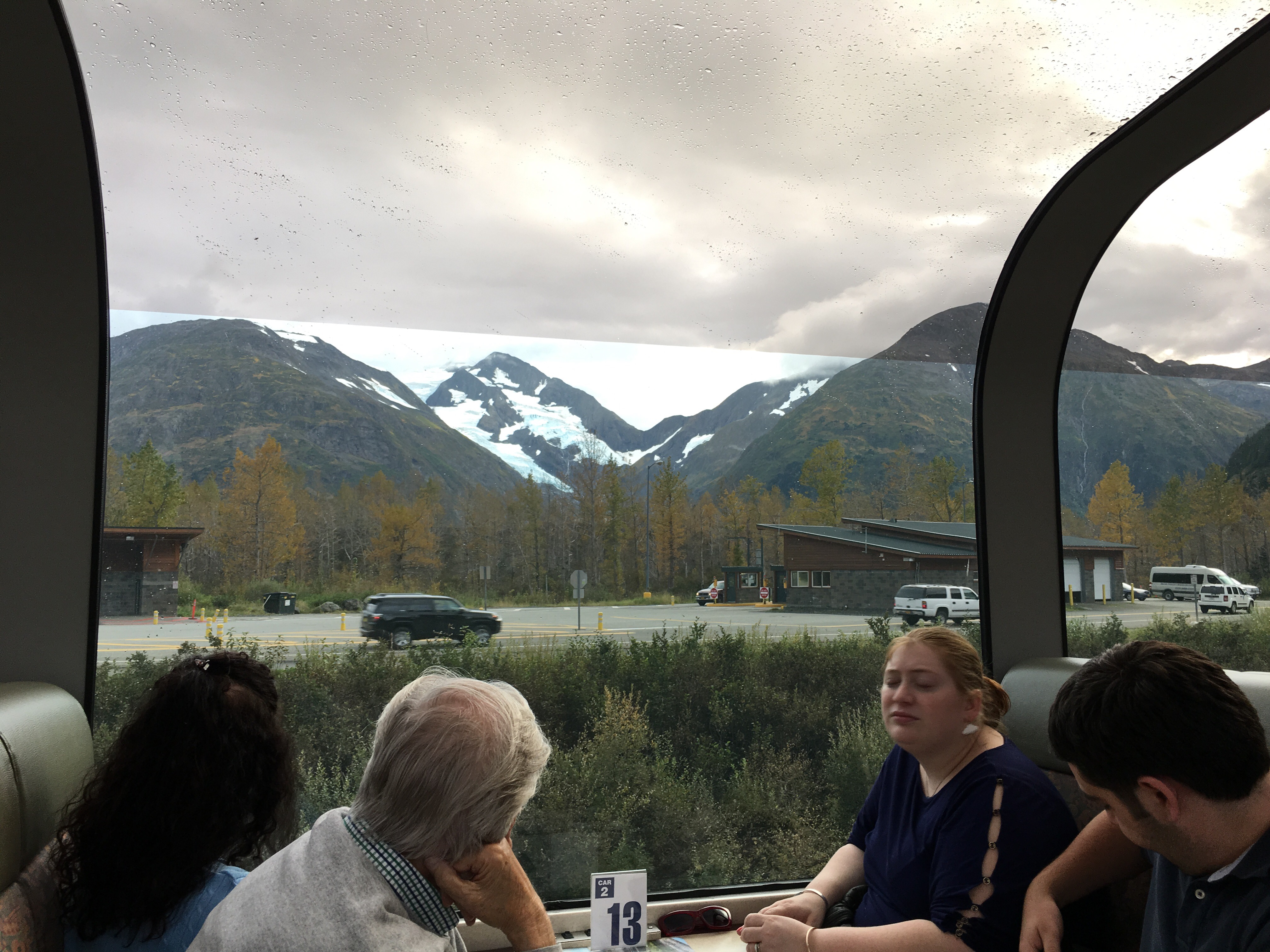 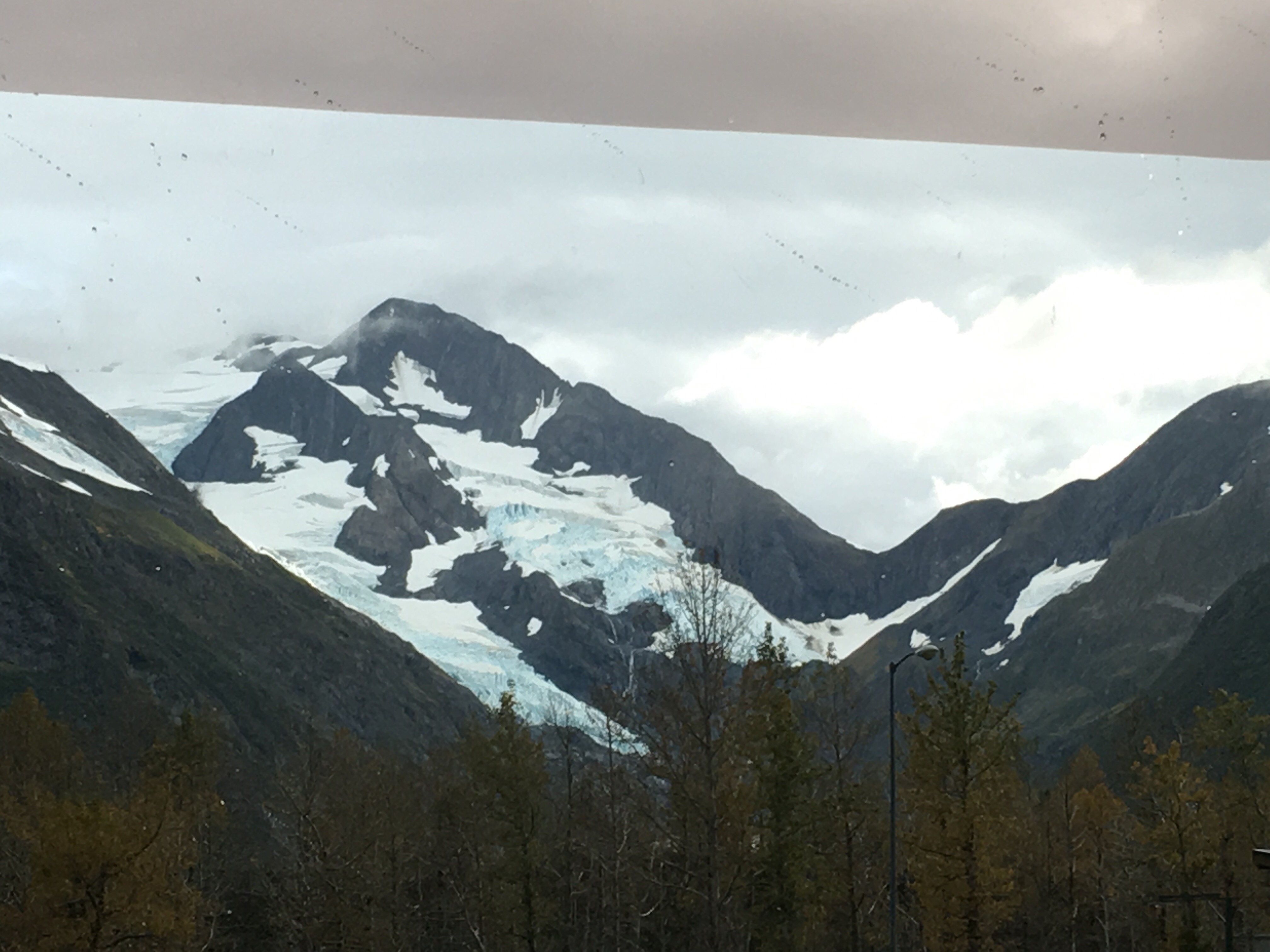 Security checks, swipe cards given, passports checked and eventually we were on board – just as an ambulance pulled up and a large man wheeled down the gang plank.  Juniper could set up agents on board these cruises, they’d do quite well. 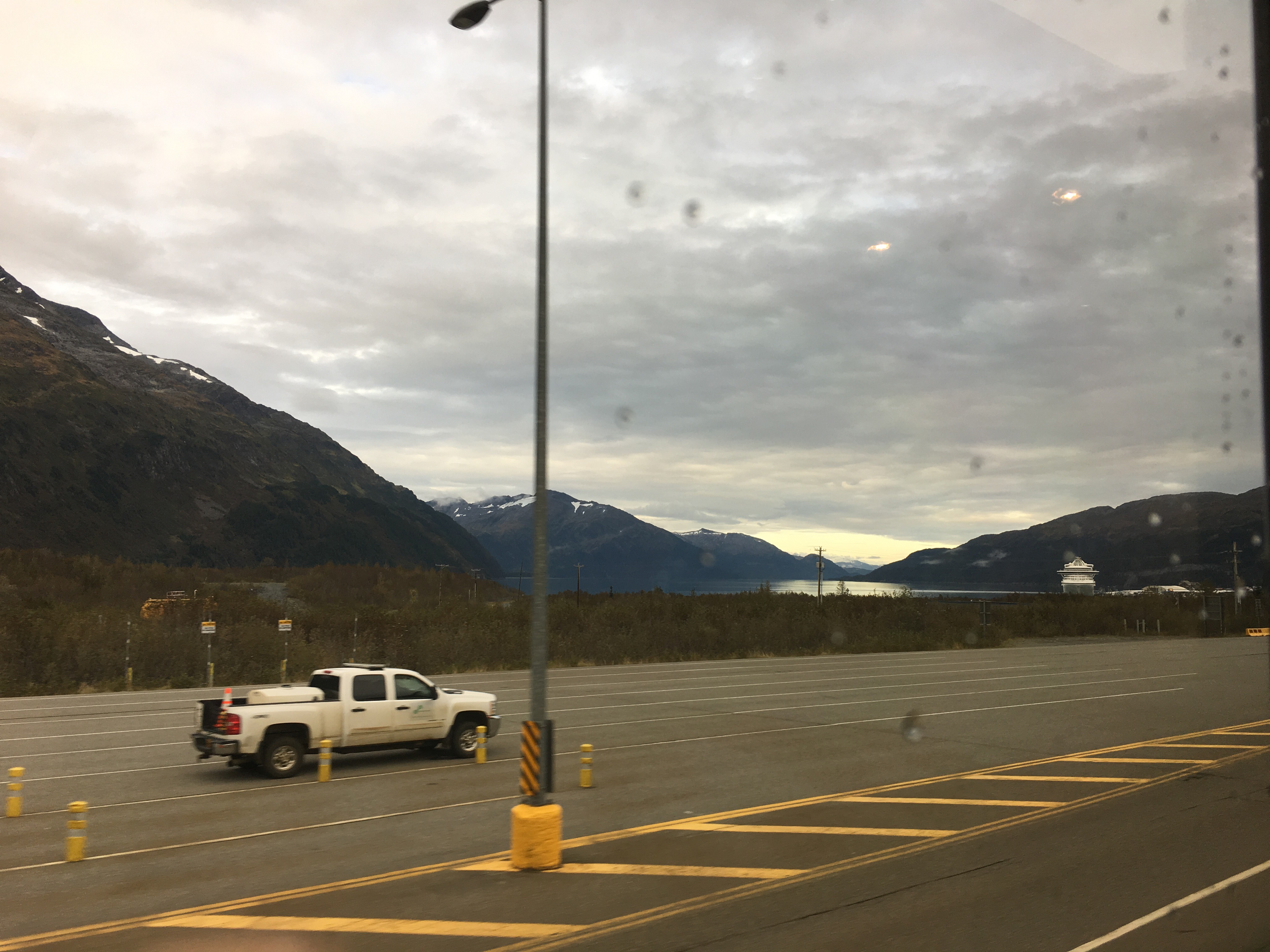 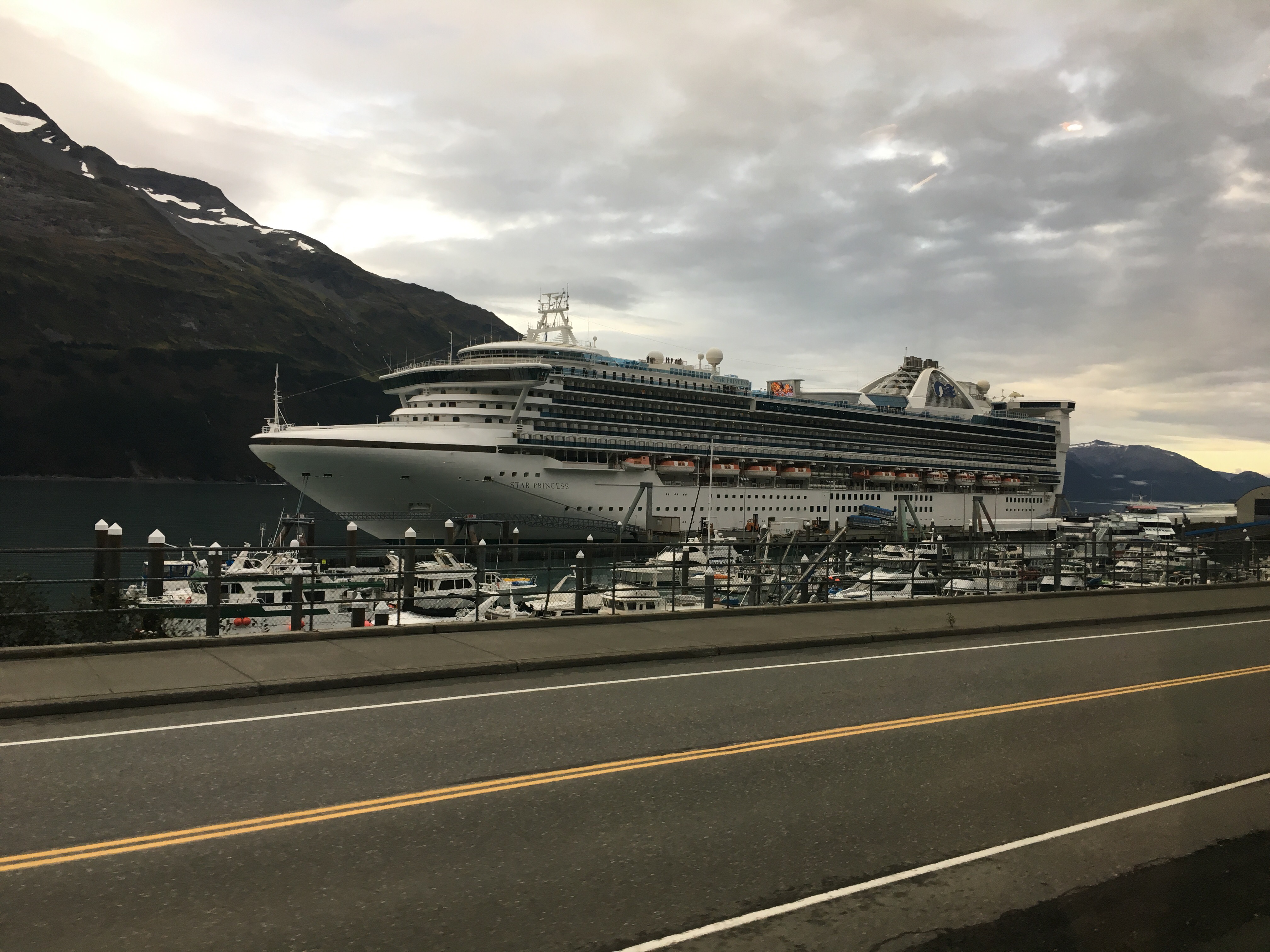 We found our room, not a bad size, but not ‘roomy’. Internal, midships.

A full passenger muster was called for not long after we arrived, and once that was over and I’ve proved to my young female crew member that was checking  I could put my lifejacket on – to which I got a lovely – “good onya mate”, we were free to roam.

We’ve booked for ‘anytime dining’ which I rather hoped was a casual arrangement – perhaps cafe food or buffet. But alas, it’s normal restaurant with menus, four courses and all the overeating options you could dream of. We were seated with three women from Alabama who’d experienced many cruises who were thrilled to have an engaging pair of Aussies to lighten their otherwise generally glum mood.

Cruising down the coast overnight and to a glacier by tomorrow afternoon. I’m keen to explore more of this floating palace and find a spot to sit and watch the world go by.

We enjoyed listening to the Adagio Trio play their string ensemble most nights. I’m better at stills than video.