Many thank to Grant Hart (Grantlee Rockitt), musician extraordinaire and nice bloke, Brian and I have bought a 1990 Landcruiser GLX with 400,000km on the clock. Manual, and already fitted with a Diesel engine with 150,000 since new, it will be the base on which we will build a functional expedition vehicle.

Over the next months it will get new springs and shocks. New wheels and tyres. Most likely a factory turbo 1HDT with new GTurbo, and 3″ exhaust from Shaun at Carline Mufflers in Balcatta.
Oh and a paint job and probably more comfy seats.

I picked it up yesterday from Grant, and drove it to Harvey to spend the weekend with Kerry. Drives nicely, smooth ride, pulls a bit to the left, a few rattles here and there but nothing major. Pick up is fine for a non turbo engine, up to 80kmh that is. Oh for some grunt so it will DO something over that. I now understand about ‘building speed’ as opposed to ‘acceleration’. GTurbo, here we come. 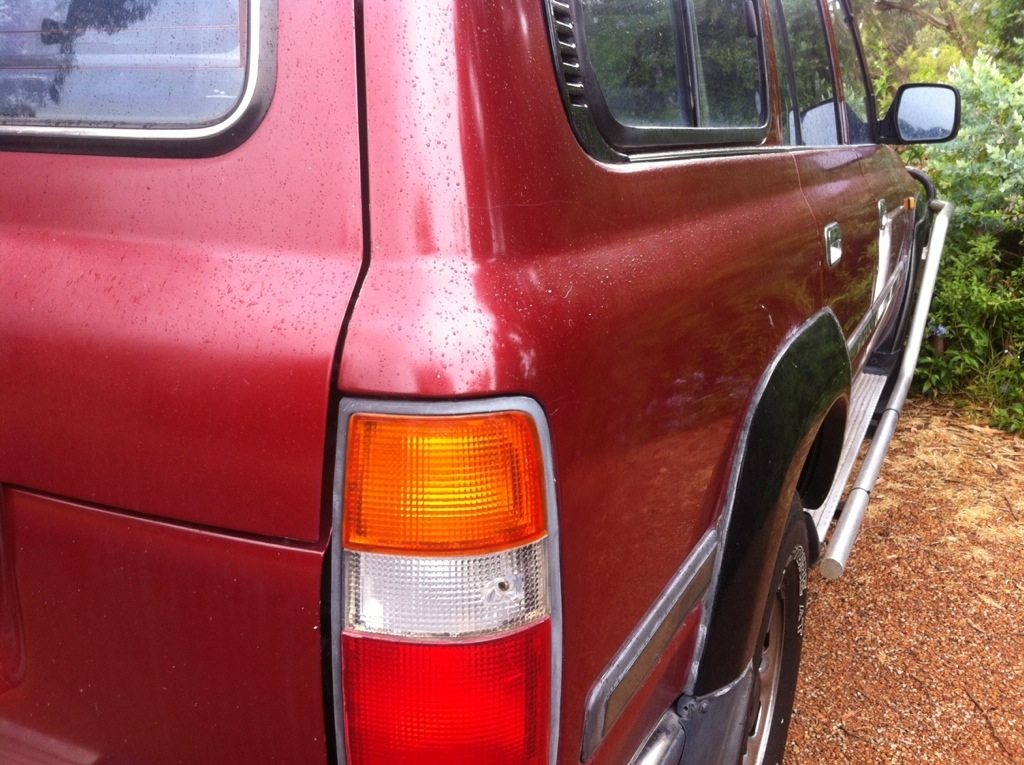 Monday 25th November 2013 goes down as the day for the first purchase – the spending of cash – hard currency, not just chat and dreaming.

I bought a pair of bucket seats for the rear of the expedition cruiser. These bucket seats have a suspension base to give the occupant a comfy ride in the back. One of our ideas is to remove the rear bench seat and put two buckets in place. These ones are from a Pajero of unknown vintage, a bit grubby but not ripped up and basically good condition. Bargain at $200.

Over the last couple of weeks Brian and I have attended several damaged vehicle auctions, been trawling Gumtree and other online sites, but not found anything of much interest that suits our budget. I did find an 80 series that might suit us, and will be looking at that tomorrow.

Brian has also sourced a couple of factory turbo engines of the right type but with broken bits we can fix at a good price. They are out in the desert, hence the good price, and transporting them back won’t be cheap, but nevertheless we hope they are a good option.

Folks, we have a project on the roll.

What sort of vehicle do you need to drive from Malaysia to Paris?

I have the mighty Vegiecruza, Landcruiser extrordinaire fully kitted out for remote off road travel in Australia.

Brian has a similar equipped mighty cruiser, an 80 series retro fitted with a 12h-t motor, the same as my older 60 series.

Both would be very capable of driving the 20 odd thousand kilometres in this journey. After all, journey’s of 10,000km are commonplace in Australia.

But what happens at the end? What happens when we get to Paris? What happens if the vehicle is damaged a bit, or a lot, or destroyed? At what point do we leave our pride and joys to a lonely grave on the other side of the world?

There is sense is buying a basic vehicle in Perth, ensuring it is sound, fitted with the required features but not overloaded with unnecessary extras, and feeling free to leave it in Paris until next time.

We are on the lookout for a basic Landcruiser 80 series of high spec, maybe fitted with a worn out petrol motor. With the skills and expertise available for the project, a conversion to diesel, fitting a GTurbo for the required performance, new springs, shocks, rims and tyres, and off we go. The budget is $10,000.

As a ten year old in 1968, I recall being in awe of the first London to Sydney Marathon. Cars, ordinary sedans as this was well before the rise of the 4WD, had driven all the way from London to India, then arrived in Fremantle and made their way to Gloucester Park in Perth where I stood in awe and amazement.

The crackling exhaust, cars sliding around the corners, the colourful regalia – all the way from London. People came to Australia in ships, not airplanes. They didn’t DRIVE.

How is this possible, how could it be done?

Jumping forward 45 years, during which I’ve been to many out of the way places in Australia in many different vehicles, doing my own exploring and finding empty places on the map and wondering what is there, my thoughts of that epic event had faded into the background.

A lucky coincidence in June 2013 found my friend Brian come across a convoy of 4WD’s in our local community, decked out in regalia and badging promoting their across Australia adventure. Based in Malaysia and led by Thomas, this group called 4x4WorldExplorer was about to head off  on a trip up the Canning Stock Route, the Simpson Desert and tour the Eastern States. They had a vacant seat for a paying passenger, and a few days later, Brian was heading off on his second trip up the Stock Route. I knew two things. First that he would be an invaluable asset to any remote area travel group, and two, that he MUST go on the journey and get involved in this group. They have toured the Amazon, across Asia, and appear well organised, friendly and easy going adventurers.

Since we had a family from Mongolia move into our neighbourhood a few years back, I have been fascinated by that country – it’s that thing about seeing blank spaces on the map and wondering what is there….  Could I ever visit there, could I ever drive across the plains in my VegieCruza?  Surely not……

All these things have come together over the last week. Thomas has sent me his itinerary for the 2014 drive from Malaysia to Paris, via Mongolia and Moscow.  I met him in Perth. He remembers me, my interests and my work – at the time I was installing a turbo and intercooler on a 60 series Landcruiser at Grame’s at GTurbo in Balcatta. He’s keen for me to join him.

Brian and Virginia are interested in coming along too, up to Moscow.

Kerry is open to being convinced to join us in Moscow and drive to Paris.

Big deep breaths, could this be happening?

The trip so far is:

Part 1 : Overland Sector
Rolls out from Kuala Lumpur on the 10th July, traversing the entire length of Thailand, crossing the Mekong on a barge, into Laos PDR, heading up the mountains and entering China at it southern most tip into Yunnan Province. In China, we hit the Asian Highway # 2, which was took 30 years to construct and now finally opened in 2008, taking us to Kunming, cutting through China’s Central Highlands, gradually bearing north easterly towards Nanjing. 3 – 4 days break at Nanjing for Vehicle Servicing, participate in Youth Olympics Ceremonies, sight-seeing Shanghai, etc.

Part 2 : Expedition Sector
From Nanjing, we head north towards Inner Mongolia, then to Outer Mongolia, and into Russia’s Central Siberia, crossing the great Siberian Plains towards Moscow. No fixed itineraries, lots of camping, lots of offroad, grasslands, out of this world sceneries, Mongolian culture, etc etc. 3 – 4 days break.

Vehicles into storage in Paris or shipped back to respective origins.