We’d motored on through the night, hitting the difficult straight close to slack tide which made navigating the ice and the whole thing easier and with less speed. Yesterday we reached 30kmh instead of the normal 15kmh in this notorious Heleysundet strait located at Map link. It made for a zoomy ride for the old Kinfish with the Captain skilfully negotiating ice, currents, eddies. Tidal charts aren’t accurate here, and once into the strait there isn’t any turning back.

I woke around 5:00am, sensing a slowing of the vessel and sat on the bridge with Robin. It was very foggy and with some large icebergs around, he checked the radar, I checked out the window. I’m sure he checked out the window too, but sitting on the bridge, one feels important. The ice seemed to form into long lines with the current, lots of little ice, some larger, and he had to cross these lines by carefully picking a gap of 20 metres or so wide and slowly negotiating the 100m wide slurry.

Negotiating the ice in the Hinlopen Strait. The steady chug of the Grenaa Diesel named Sophie was always present and reassuring. 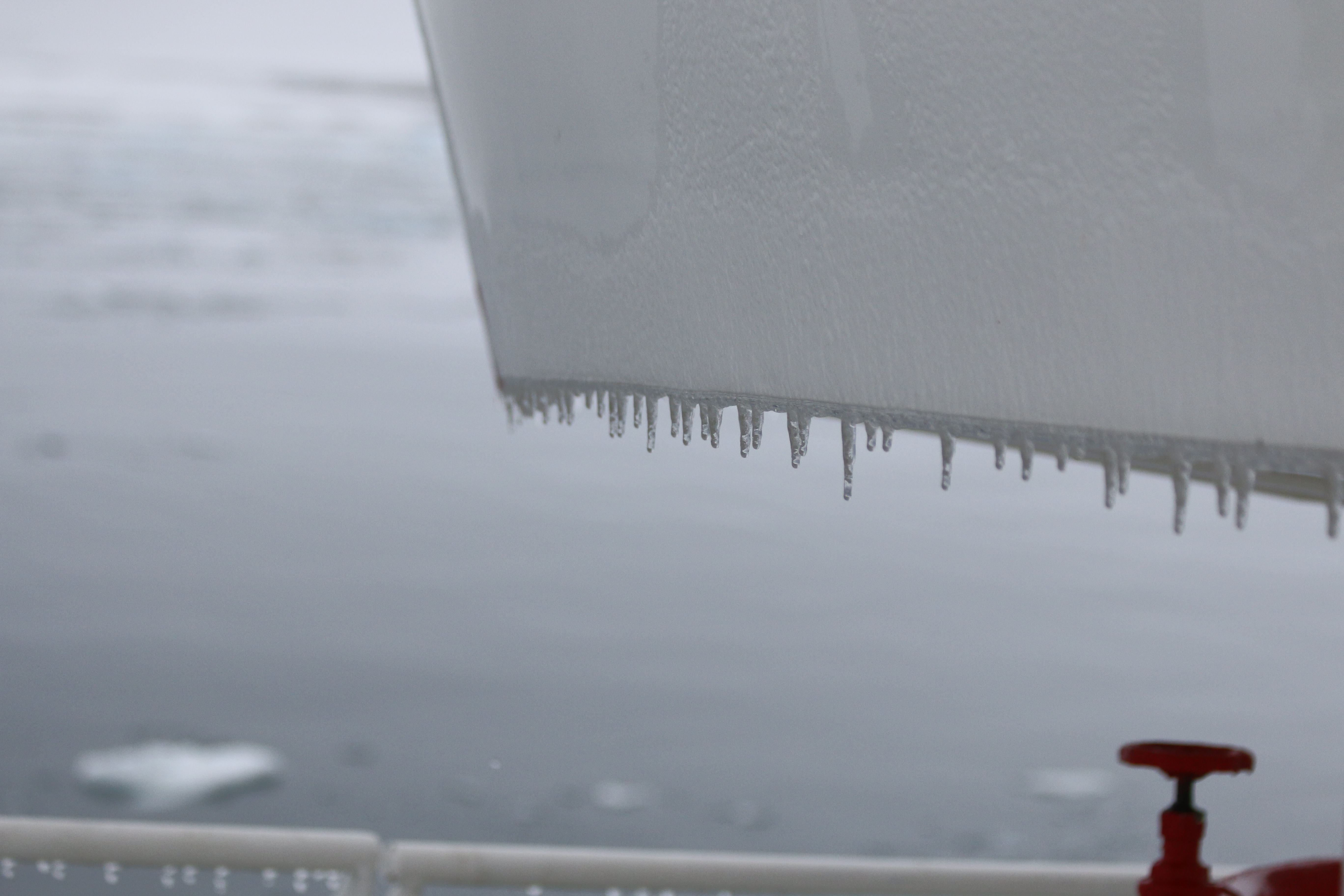 Some walrus were found on floes, mothers with cubs. We approached land and the prepared for a cold foggy zodiac ride to check out a group of walrus on land, about 10.  Quite amazingly the clouds cleared and we had a wonderful sunny 6 hours off the boat. We cruised around the walrus for several hours, drifting closer each pass, everyone drilled to keep quiet and still. The machine gun of the cameras do disturb the quiet atmosphere so it is best to choose the zodiac without that particular couple in it. One of them took 5000 photos of walrus this day. Five Thousand!!!

The walrus mostly lay about on the land, but some were playing in the water. They were all males, some were stabbing each other with their long tusks as part of the play, or as part of ‘stop annoying me’. Hard to tell. They’d swim up to the zodiacs, getting closer each time.

We landed about 200m from them and slowly walked as a group, closer to them. Again, we were all quite disciplined and it worked well. My feet were cold in the thin rubber boots, even with two pairs of socks. We were walking in thick snow, sometimes knee deep, which in itself was a very new experience for the Aussies.

Morten took most of the group for a walk along the coast that lasted an hour or so, before cutting inland to return to the group. As we were standing near the zodiacs a couple of walrus, including the very biggest of them, surely weighing 1000kg, came up to us and walked to around a metre from some of us. Just looking, curious. We looked back, also curious.

The cloud was coming over so it became a little colder and less bright as we admired the vast empty landscape before boarding the zodiacs to return to the Kinfish moored 500m away.

Walrus swam closer and closer, with the water a little clear. This went on for half an hour and there were three or so walrus swimming around us. They seem to get more game when there are more of them in a group. I was looking over the edge into the water and a walrus rose from the deep coming straight for me. Eyes open, tusks MOST visible, then it popped it’s head up about a metre, maybe less from me. We had a bit a look over each other and as he dived there was a friendly little splash – or did he spray water at me from his mouth?

What a close encounter.

Returning to the boat dinner was had (We had crumbed fish followed by blueberry pie and Jacob’s Creek wine.) and I needed to show the underwater footage I’d collected. Unfortunately the water was not clear enough to show anything useful.

Bed was welcomed after this long and wonderful outing.