Off on another walking tour this morning – it’s nice and sunny in Oslo today, forecast for a high of about 20°C. But my companions are keen to find out what they are in for in Longyearbyen.

Dismal weather it seems – this is mid summer at the north pole. 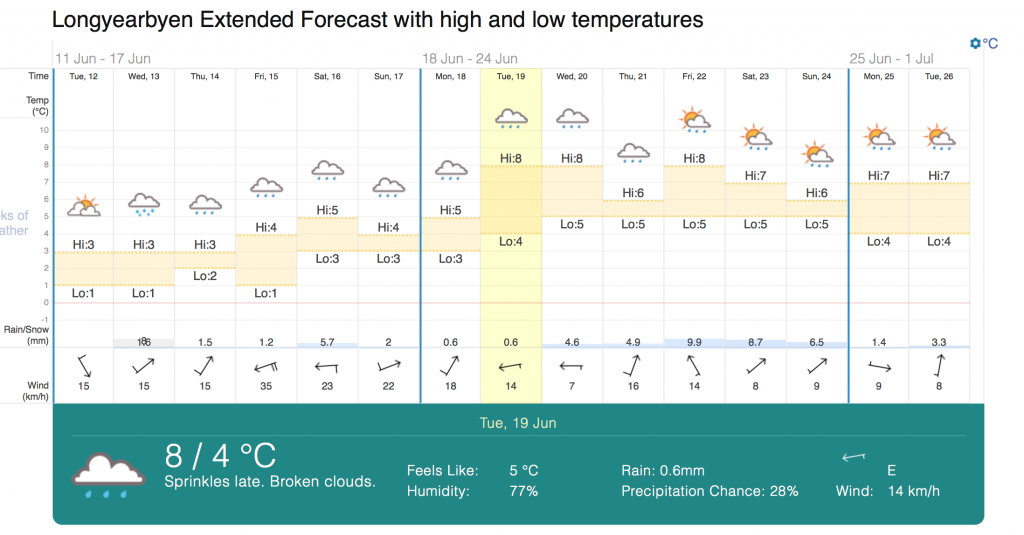 But that is for tomorrow. Today, we have another walking tour to get to  and this time by 10:00am the Tiger at the train station.

Oslo Free Walking Tours sorted us out again, this time with around 40 people on a warm summers day.

Whilst the guide was enthusiastic and native born Norwegian – Viking she said – the topics were not quite so interesting as yesterday.

But we did discover some of the highlights of the city – the fancy looking opera house, old city halls with wonky walls built many years ago, waterfront with big cruise ships, the city’s attempts to copy the Champs Elyse in Paris, and plenty of yarns too. These ARE good ways to see around cities and I recommended to any traveller to search out free walking tours – probably no matter the company. 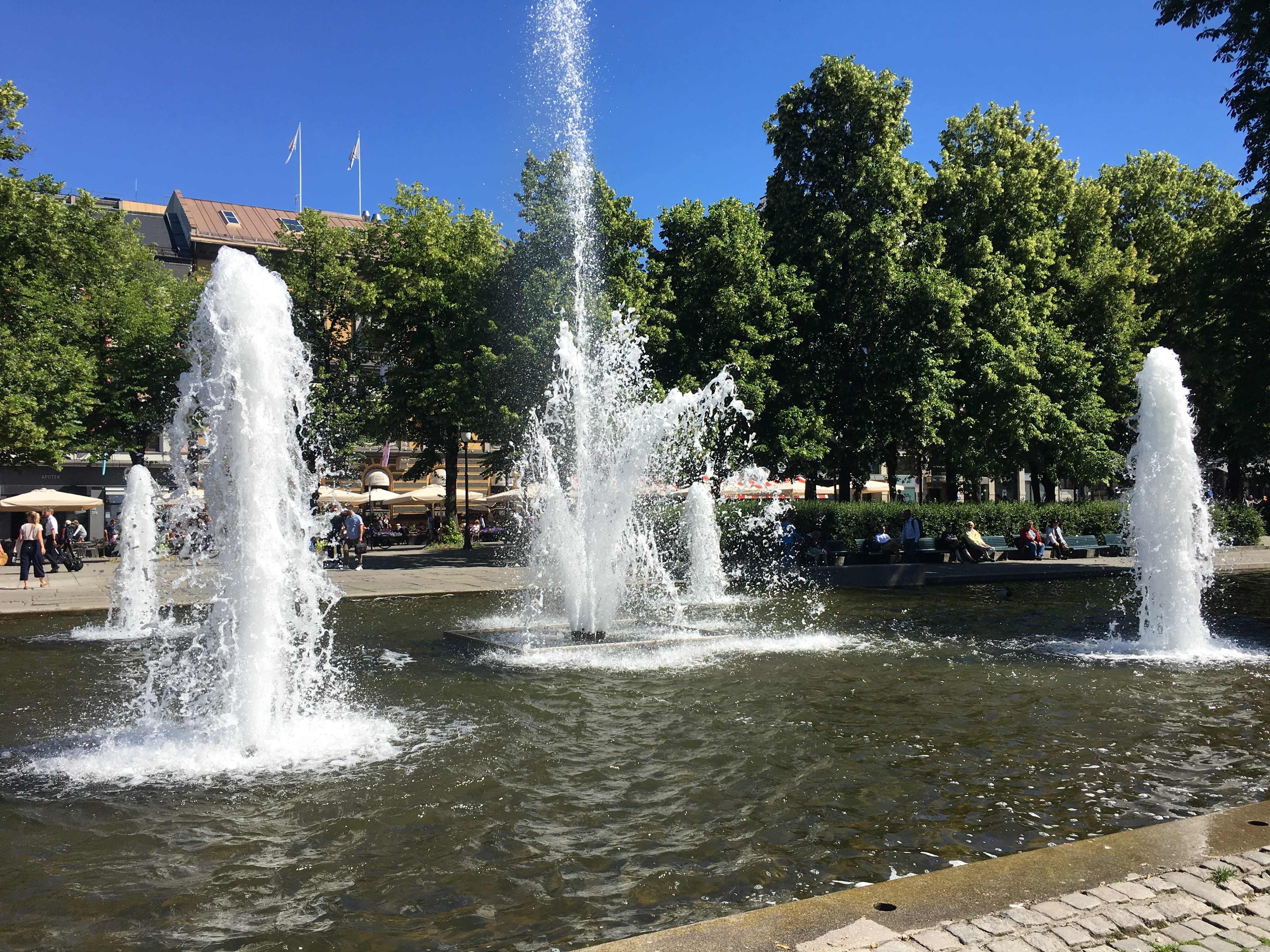 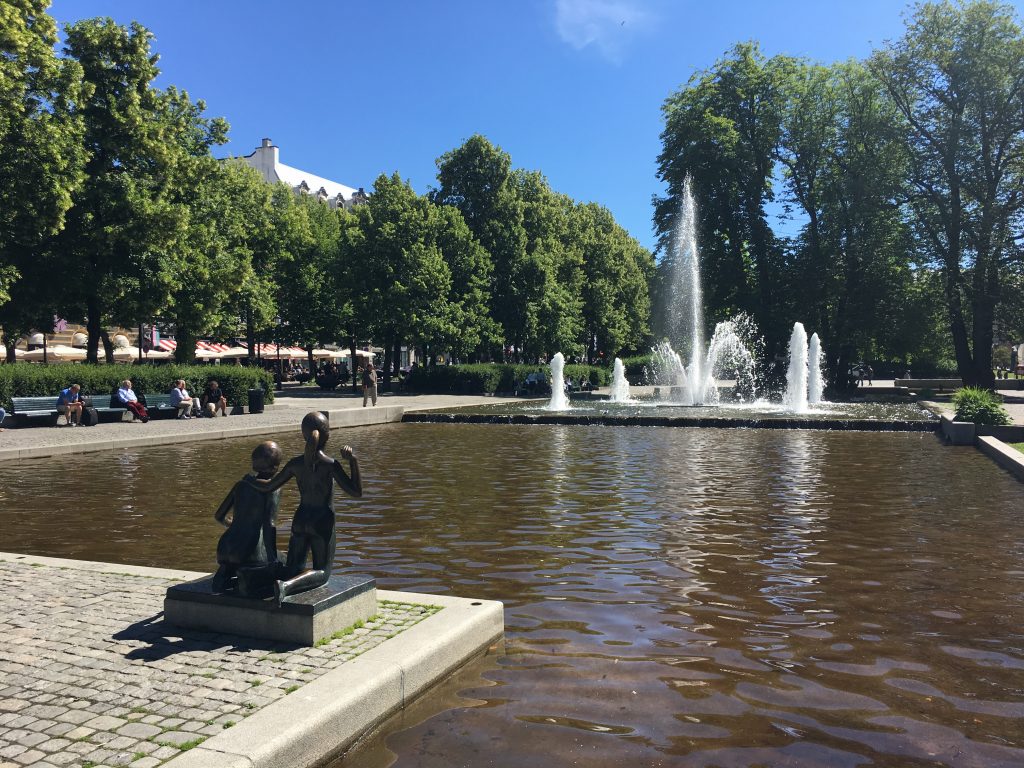 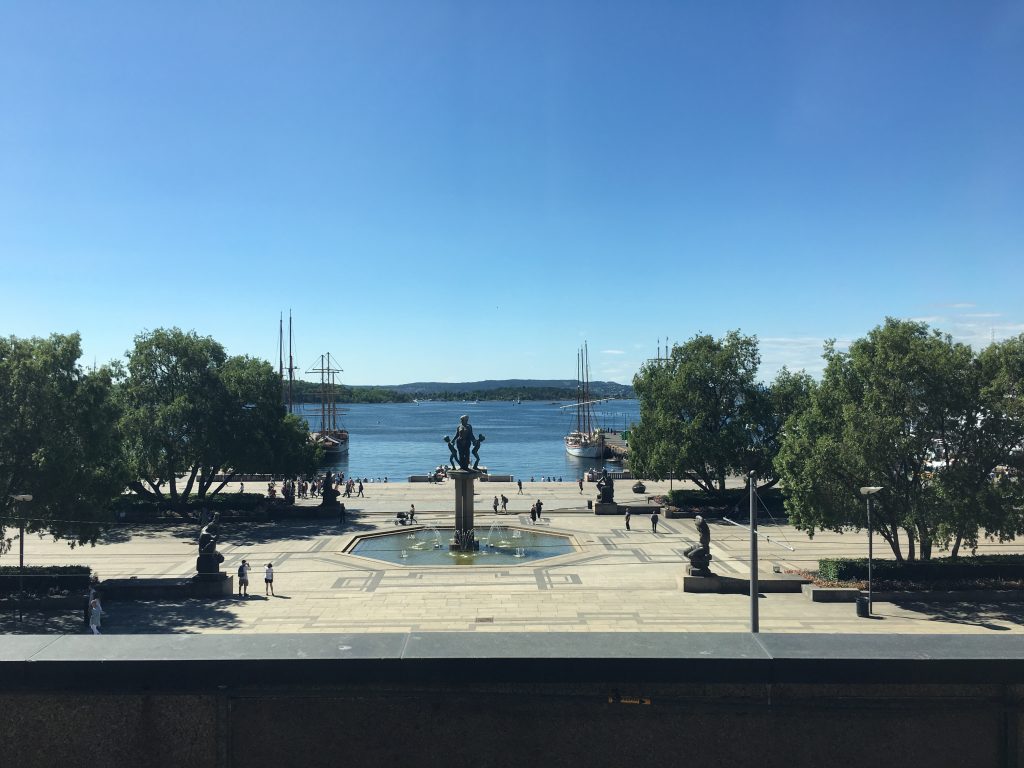 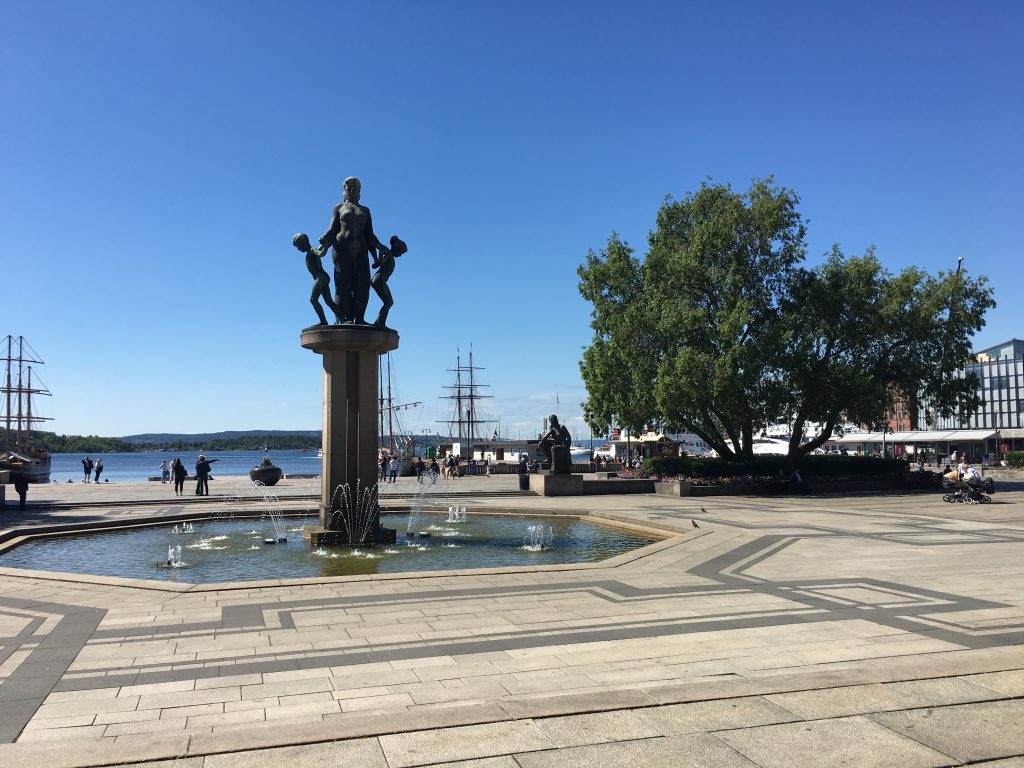 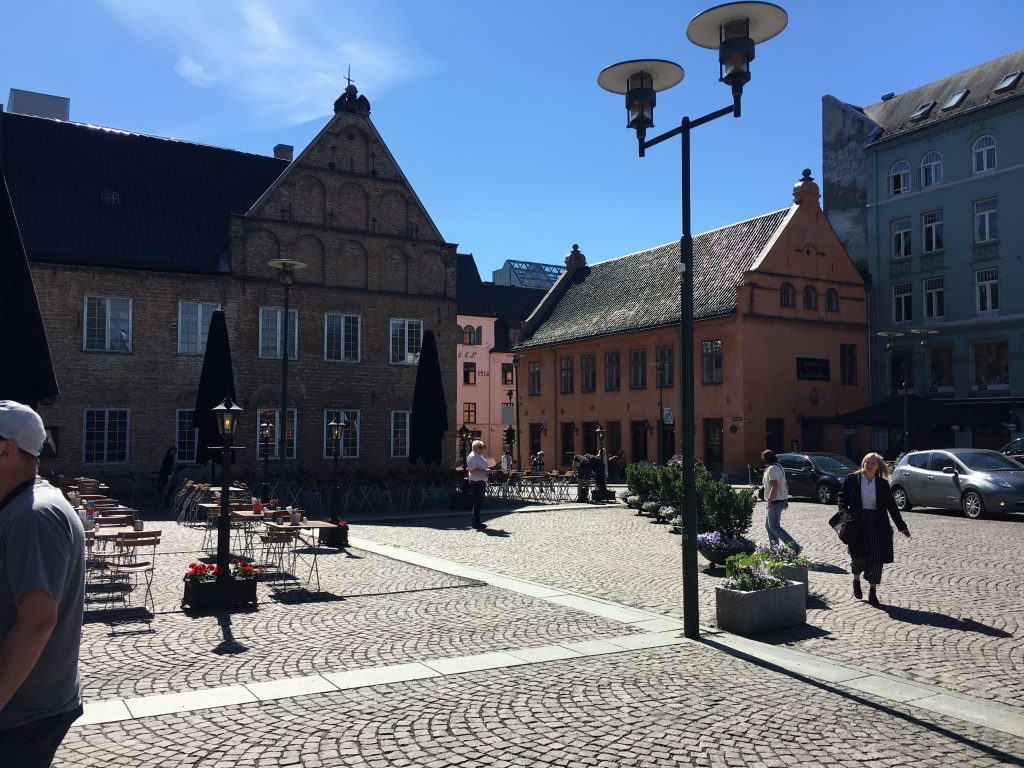 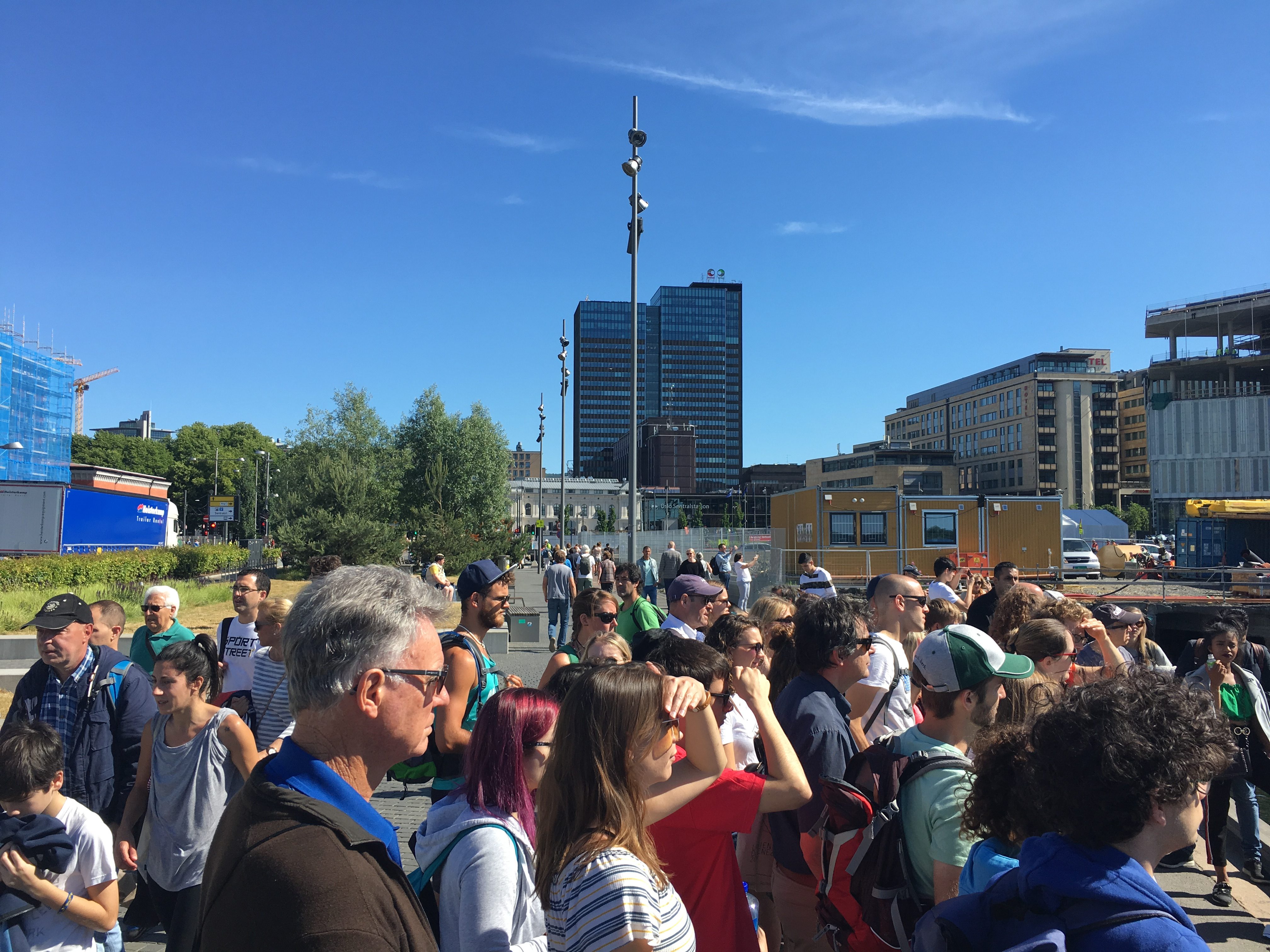 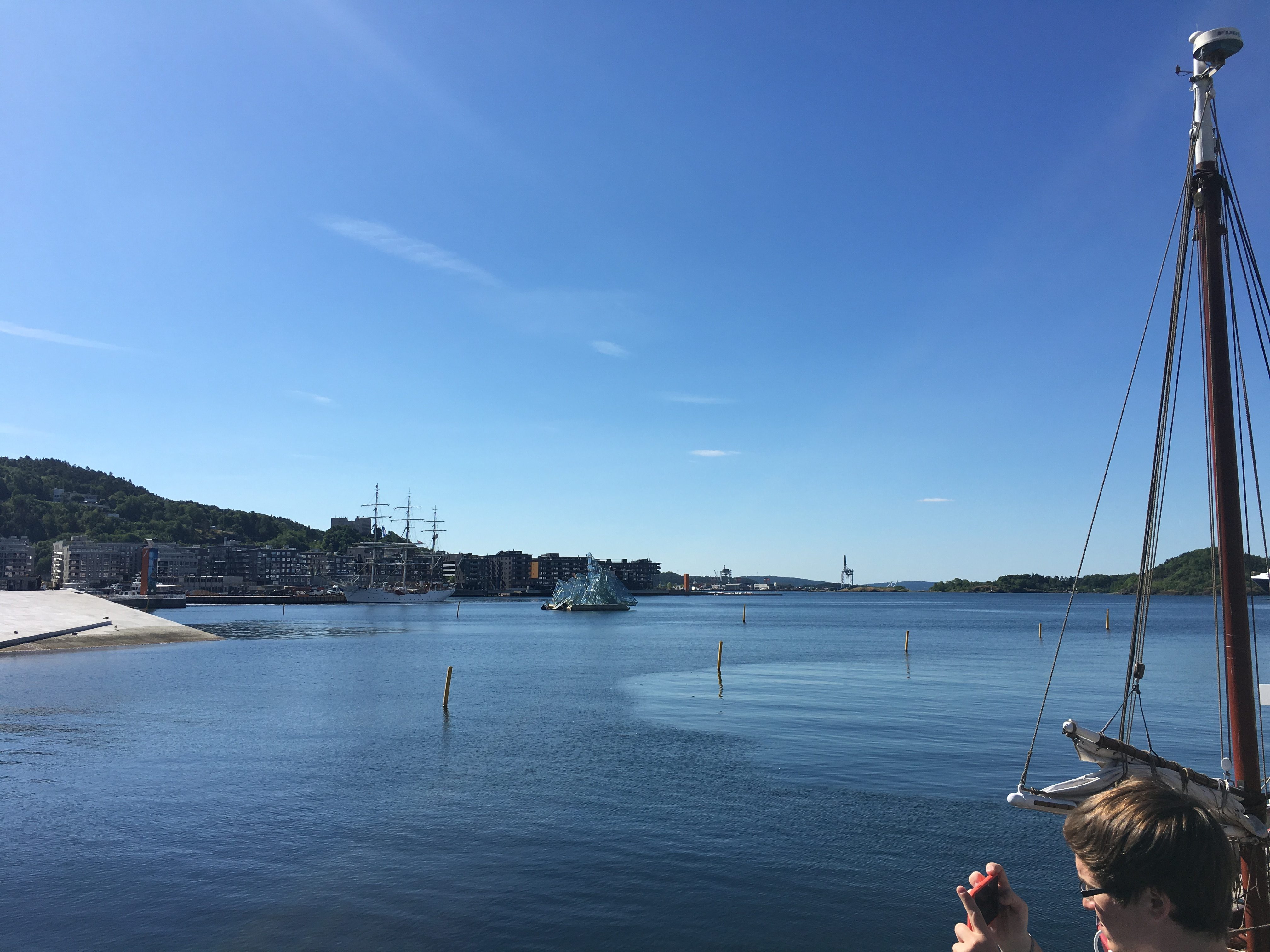 A little weary after two days of walking tours and 10kms, we enjoyed a Subway like lunch, bought some beers and enough food for tonight, and have retired to our very spacious and pleasant apartment to do washing, repack for tomorrow. 6:30am leaving from the front door for the flight north to adventure really begin.

Plenty of time to catch up with things, rest, chatting and setting up IT.

Around midday we ventured out, keen to understand the train station. This was going to be important if we were in a rush on our return from Svalbard in a couple of weeks. If the airport terminal and customs are delayed as much as they were when we arrived yesterday, we could well be in trouble for catching our train to Bergen.

Weather forecast for the afternoon included a 40% chance of rain, so I didn’t take anything more than my cap and a windcheater to keep warm and dry. By sharing other peoples umbrella’s this worked quite well – the other people were from my group, not random strangers. Although Laura did share her umbrella with me. More about Laura later.

We found the canal near our unit to be a nice place to walk along and stay oriented in the city. The amble to the train station takes about ten minutes. 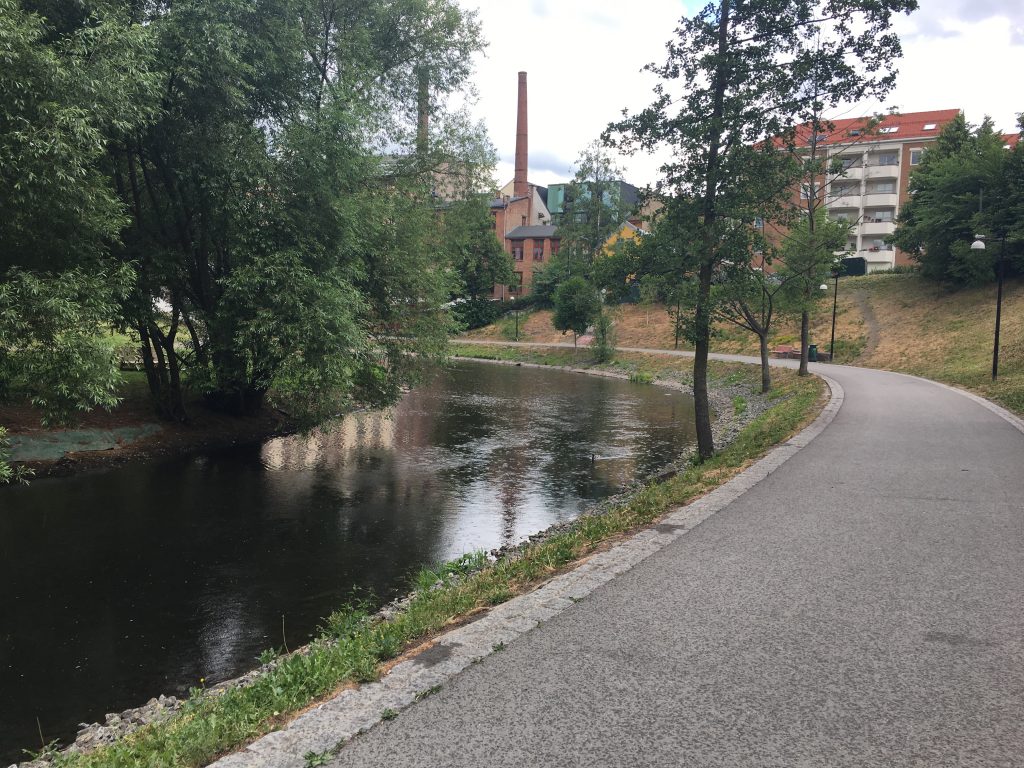 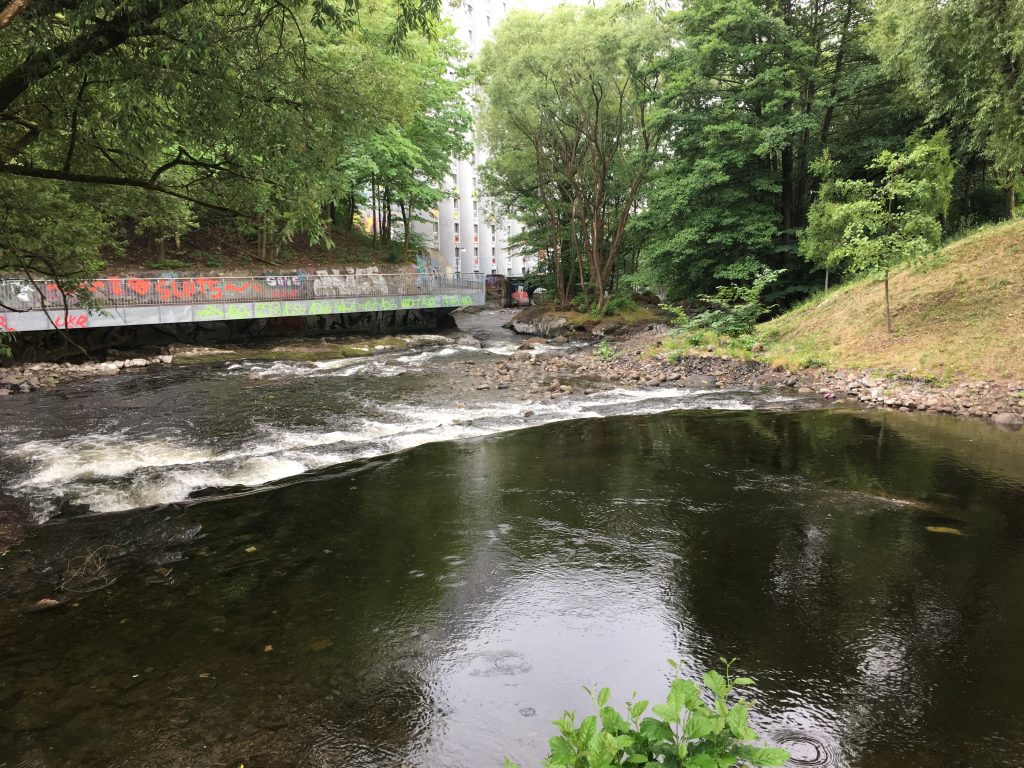 The ever helpful NSB train station guide told us that the train from the airport normally arrives at platform 11 and the train to Bergen normally leaves from platform 3. He also reassured us that I didn’t need the paper tickets I’ve beside the printer at home, as has Barry, and that the electronic versions on the iphone will work just fine. This is helpful research and clears away a few questions that we no longer need to worry about.

Visiting the tourist bureau gave us time to think about what to do over the next days, and as it happened, a free walking tour was leaving from just outside the train station in a few minutes.  So off we went, with some of us spending 20NOK for a toilet stop, each. About A$4!!! In a country with close to free water, we’re wondering about the price. Turns out they have a 25% GST too.

Jenny was on the lookout for odd characters.

Anyway, we met Laura from Free Tours Oslo. She wrangled about 20 of us over the next 90 plus minutes and took as wandering through the east side of Oslo, apparently quite the home of the hipster scene.

A bit of rain came and went and some of her stories entertained us, some were sobering. It surprised me a little that she talked about Anders Br**vik, the man who blew up a van bomb in central Oslo, near our tour route, and then went to an island off the coast and shot 69 young people on a youth camp. I’d forgotten about this and not linked it to Oslo. For all the wrong reasons, it was the centre of world attention.   His first attack targeted the area in the photo below, the centre of the political groups who he saw as aiding the demise of Norway as he knew it.

Onto much happier things and colourful places, Laura left us on our own and we thanked her with an obligatory tip.

She’d mentioned some old houses where they were ‘stuck’ together and low and behold, I think we found them – and alongside a lovely traditional allotment where many locals tended their own patch of dirt. We were surprised at how well things had grown in the short time since the snow has gone. 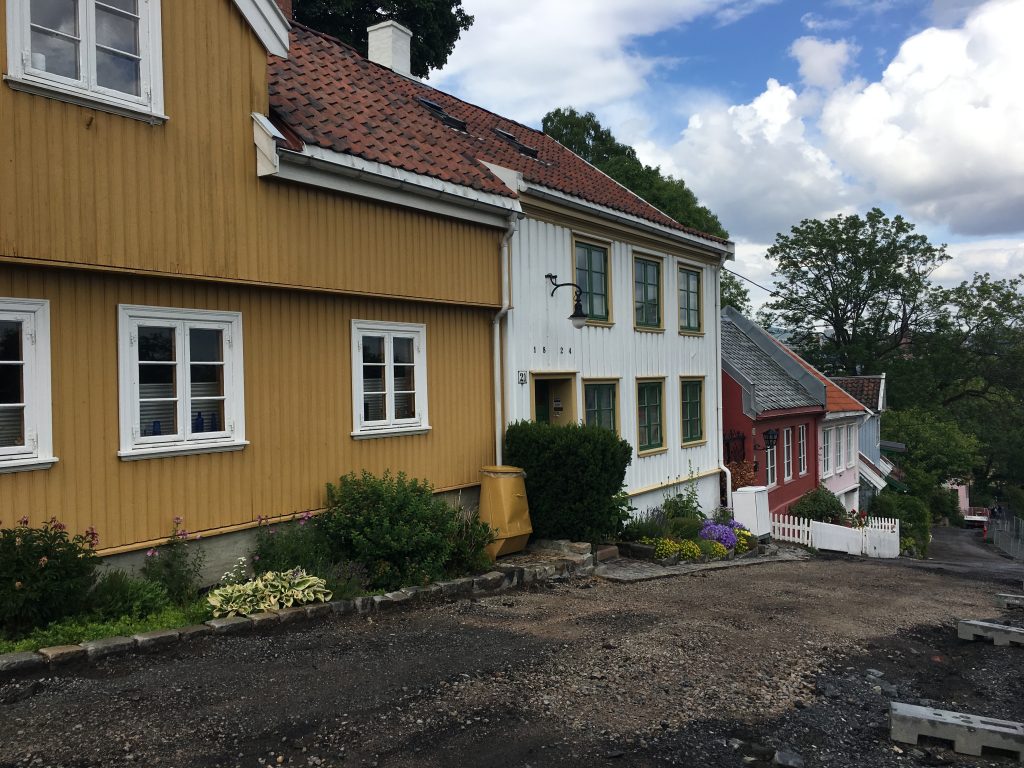 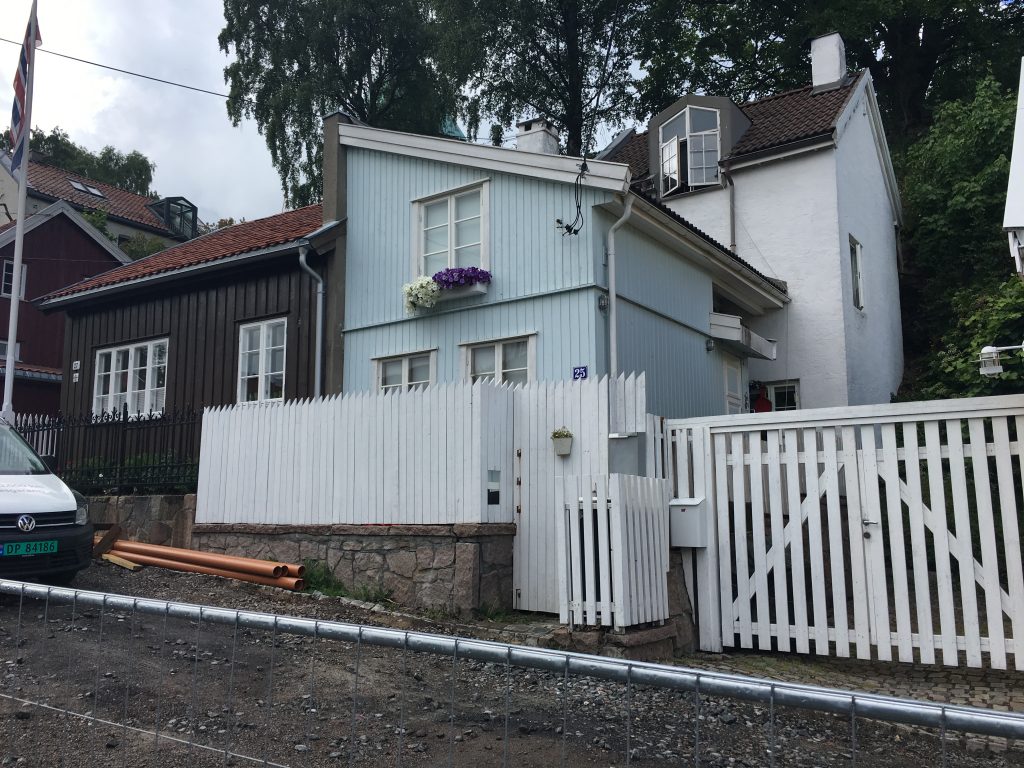 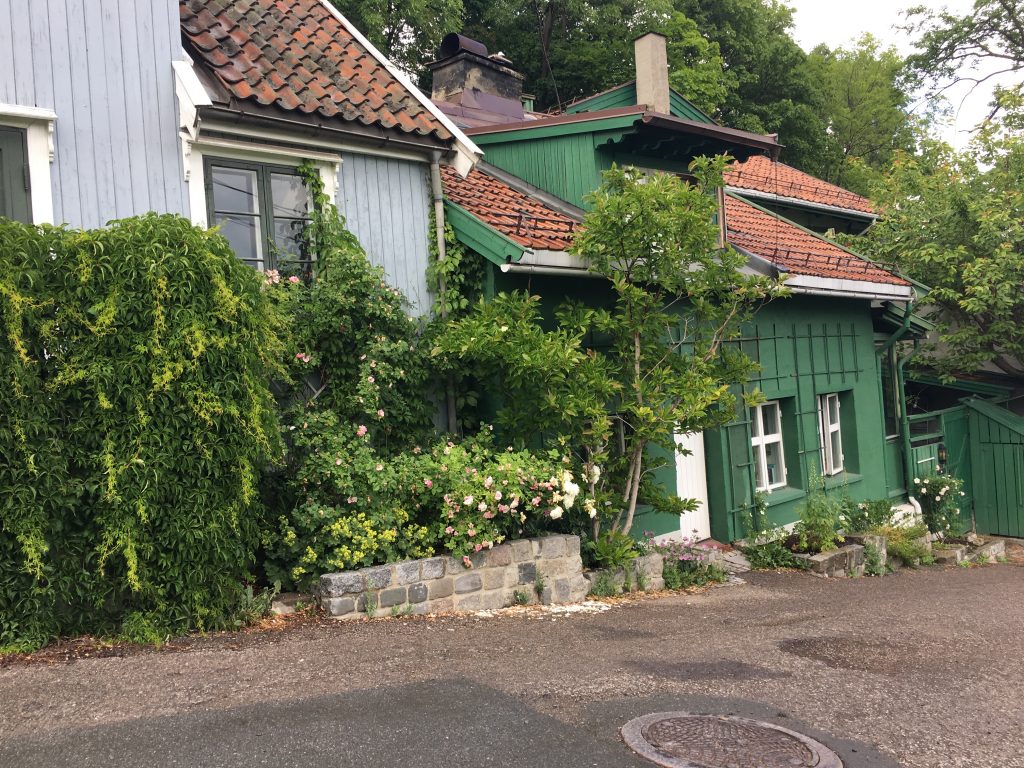 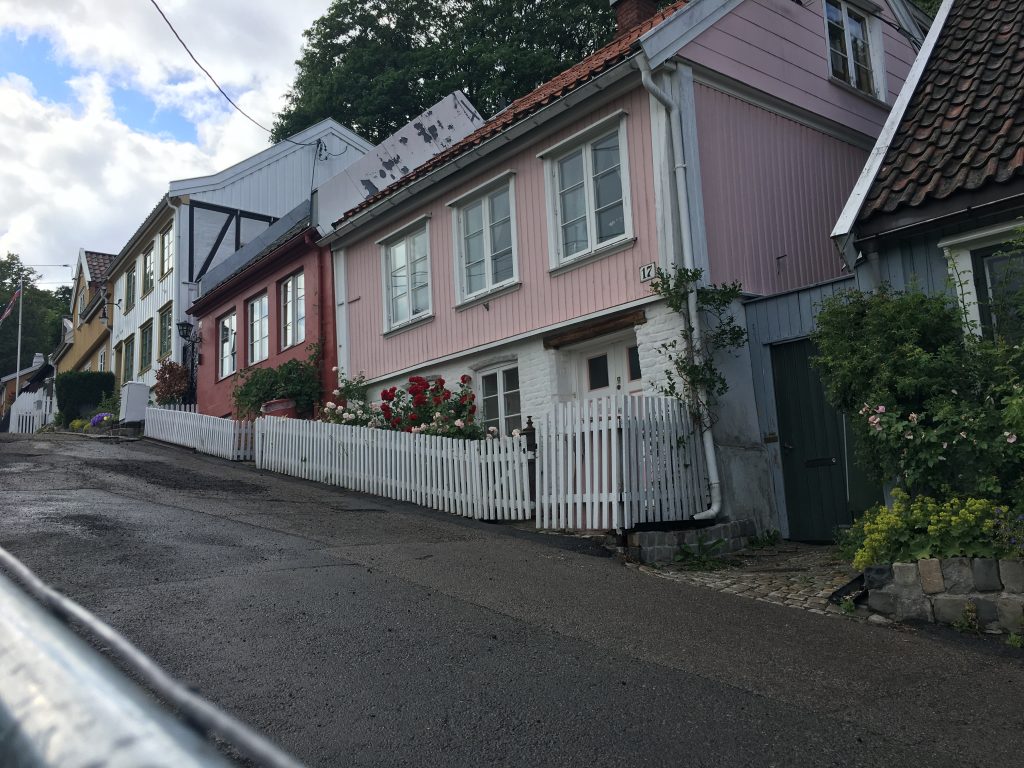 Thanks to the great off line mapping app I use – Pocket Earth, I traced our route through Oslo.

It also showed us the way home and as we’d not taken much water – and noticed there wasn’t any public water fountains around the place – and hadn’t eaten for quite some time after second breakfast, the challenge was to find a place to sit, relax, enjoy a meal and a quiet ale. A friendly local recommended a place nearby and sure enough, it was grand. The salmon and beer were just fine thank you. The weather got a bit cooler, Jenny needed a blanket. 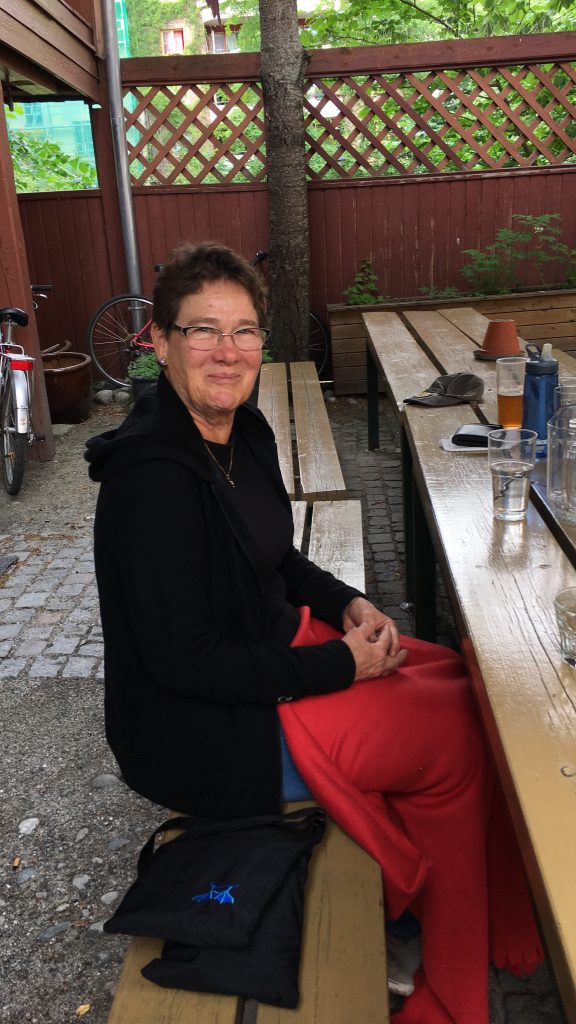 After months of planning, our holiday to the top of the world has commenced.

Bags loaded and checked in. Carry on for two of us was within limits, Barry doesn’t use scales…..  Is he going to be the naughty one for this trip?

With our farewells to Kerry, Jan, Janet and Larry – thanks for coming to see us off, we boarded the big A380 and settled in for the flight.

With plenty of legroom it was looking like it was going to be a good flight, and it was really – just very long. And when the seats in front came back on us, Barry’s leg were jammed. Through the night somewhere, one of the cabin crew invited all of us to sit in Row 1, with nothing but space in front. Barry slept in peace. I went back to our now empty row and stretched across for a nice sleep.

Doha came and went with a couple of hours on the ground and back into a 787 Dreamliner for the second leg. I’d bought a set of noise cancelling ear buds and am very happy with them. They cut out most of the background hum that adds to the tiring experience of long haul flights – but they don’t deal with crying babies so well. Might even make them clearer because the background noise is muffled. I like in ear buds and not the headphones so I can sleep on them without the bulk of the headphones.

The Dreamliner had as much legroom but not as much side room as the A380, but we all arrived in Oslo in good shape. Exiting the plane took a few minutes longer than expected then we were standing in the airbridge in the hot sun – it was 27°C outside and sunny. Slowly the queue moved along and nearly two hours later we cleared immigration. Jean had arrived on an Emirates flight half an hour ahead and it was reassuring for all of us to wave to each other – knowing we had met up. She’d flown from Queensland.

Another delay getting baggage with 10 carousels but none marked with our flight. Eventually line 6 was announced to be the one, and we found our bags had been loaded onto the floor, then reloaded onto the carousel given the time delay. As I had my laptop and camera lens in the checked bag to even out the carry on weight, I was rather pleased to find it was all intact. Carrying $25 rubber boots from Bunnings that weigh over 3kgs seems like a wasteful use of energy!

We found our way to the train station which was part of the airport and for some reason I bought five tickets instead of four. At around A$20 each, it was worth pleading stupidity and getting a refund. Given they couldn’t believe a single traveller would buy five tickets, they gave me a refund for four tickets, so I needed to buy another three tickets. If this is confusing, you should have been there. Fortunately my travelling companions are patient!

Onto the lovely train for the 23 minute journey into Oslo. Wi-fi on board. Crowded. There is a slightly faster and more expensive private train – this one by NSO the public system,was fine. Fast and quiet. One stop.

Once in central Oslo train station out came my mapping app and it came into it’s own. Guiding us through the city streets to our accommodation and taking around ten minutes walking. Rather like I had expected the little walk I planned for Kerry and I in Vancouver that ended up in us being delivered by a Police car. …..

No Police car seen or needed this trip. Arrived at door to set of apartments but hadn’t heard from the AirBnb host. Hmm. What next?

We needed to phone her – but didn’t want to use roaming on the phones. I’d set up Groundwire app and using my VOIP provider MyNetFone on wifi was going to be easy. Plenty of free wifi in Oslo they said. Just none where we were. So fortunately I had bought some roaming data for the iPad and soon enough a phone call had got through and the host turned up.

She’d been waiting for us at the train station, and had sent Jenny a text whilst were on the train. Jenny hadn’t got this message because she’d not turned on roaming on her phone and was still on airline mode. Nothing lost in the end and Lata showed us around her lovely apartment.

A shopping trip for supplies found Barry, Jean and Jenny at the pub. Other things were also bought. No take away alcohol is for sale in Norway on weekends.

Lovely salad for dinner, and climbing into bed was wonderful – 28 hours after leaving Perth!!!

Svalbard is a group of islands belonging to Norway. We flew from Perth to Oslo, then Longyearbyen and boarded the Kinfish to travel around on the ocean. Many expeditions onto land to see wildlife.

Then to Bergen and back to Perth. Follow us on this map.

An awesome opportunity has come about for me to travel to the group of islands close to the North Pole named Svalbard in June 2018.

It’ll be 24 hour sunlight and peak summer. The temperature might get to 5°C!   uuuugh, I really don’t like being cold. sigh.

Along with cousin Barry, Jenny and Jean, we’ll be flying to Oslo for a couple of days to recover, then flying to the lovely named village Longyearbyen.   It’s part of Norway, though several hours flight north of Oslo.

We’ll be boarding the small boat, the Kinfish, for a ten day tour run by http://nozomojo.com

We have to board by 16:00 +2GMT  on Thursday 14th June. There is a webcam of the port at Longyearbyen, Svalbard so you can see us board.

Go there when we are, and we’ll wave to you!!